By Newsroom on August 4, 2014Comments Off on Jeff Bridges to NBC’s Chelsea Clinton: “Hunger is a Non-Partisan Issue”

Describing Jeff’s work with Share Our Strength’s No Kid Hungry campaign in an article on NBC.com, Clinton wrote, “Listening to his commitment and enthusiasm relaying progress on fighting childhood hunger through summer meal programs stretching from Arkansas to Montana was as compelling as any role he’s ever played on screen.”

Bridges was interviewed in Las Vegas, Nevada as he visited a library where at-risk children receive free meals when school is out through the federal summer meals program. The following day, he joined Nevada Governor Brian Sandoval to raise awareness of free summer meals to families in need, and the role Governors can play in expanding these programs.

Summer is the hungriest time of year for many kids, as school meals disappear. Family food budgets are stretched tight with low-income parents reporting to spend $300 more on food each summer month. The federal summer meals program helps children get the healthy food they need when school is out. These free, healthy meals are available to kids and teens across the country, but only a fraction of those in need have access. Many low-income families don’t even know the summer meals program exists. 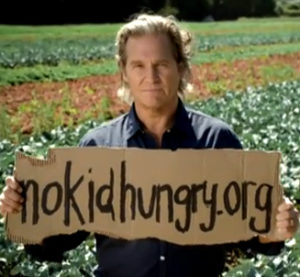 Since 2010, Bridges served National Spokesperson for the No Kid Hungry campaign and has been a tireless advocate for ending childhood hunger in America.

“Jeff serves as a voice for the 16 million voiceless children who struggle with hunger in this country,” said Tom Nelson, President of Share Our Strength. “This summer, he’s traveling the country, working on-camera to raise awareness about summer meals, and behind-the-scenes to build the political will needed to surround children with healthy food every day of the year.”

As a generous thank you to No Kid Hungry supporters, Bridges is hosting one lucky winner as his VIP guest at the premiere of his new movie, “The Giver,” in New York on August 11. Supporters can enter for a chance to win at NoKidHungry.org, by 12pm Pacific/3pm Eastern on Monday, August 4.

Jeff Bridges to NBC’s Chelsea Clinton: “Hunger is a Non-Partisan Issue” added by Newsroom on August 4, 2014
View all posts by Newsroom →