By Newsroom on September 26, 2012Comments Off on Nestlé continues to unlock growth opportunities in Africa

Nestlé is continuing to unlock growth opportunities in Africa with the inauguration of its first factory in the Democratic Republic of Congo (DRC).

The company has invested CHF 15 million in the factory in Kinshasa as part of its long-term efforts to better adapt its products to local tastes and nutritional needs.

The site, which opened in 2011 and is now fully operational, is a ‘finishing factory’ for micronutrient-fortified Maggi culinary products such as bouillon cubes and tablets.

Finishing factories have a flexible design that makes them easily adaptable for different manufacturing purposes, including processing ingredients or packing products. They enable Nestlé to get closer to its consumers while maximising its use of locally produced raw materials.

The site in Kinshasa has created more than 60 direct jobs and is providing business opportunities for suppliers in the region.

It is the latest factory of its kind Nestlé has inaugurated in Equatorial Africa recently, following the opening of another in Angola last month.

Both were built as part of a three-year, CHF 150 million investment programme the company launched in the region in 2010.

Nestlé products have been sold in Africa for more than 130 years. The company opened its first factory on the continent in 1927 and now has a total of 29.

The company has invested about USD 1.2 billion in Africa over the last five years to build up its local manufacturing capabilities, expand its distribution networks and develop more products catered to local tastes and needs.

Demand for Nestlé products in Africa is such that the company expects to more than double its business on the continent by 2020.

In the Democratic Republic of Congo, Nestlé offers brands including Maggi, Nido, Nescafé. 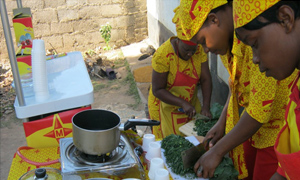 Nestlé continues to unlock growth opportunities in Africa added by Newsroom on September 26, 2012
View all posts by Newsroom →