By Newsroom on November 10, 2017Comments Off on Pour Yourself a Tall Glass of Rick Grimes Thanks to The Walking Dead’s New Wine 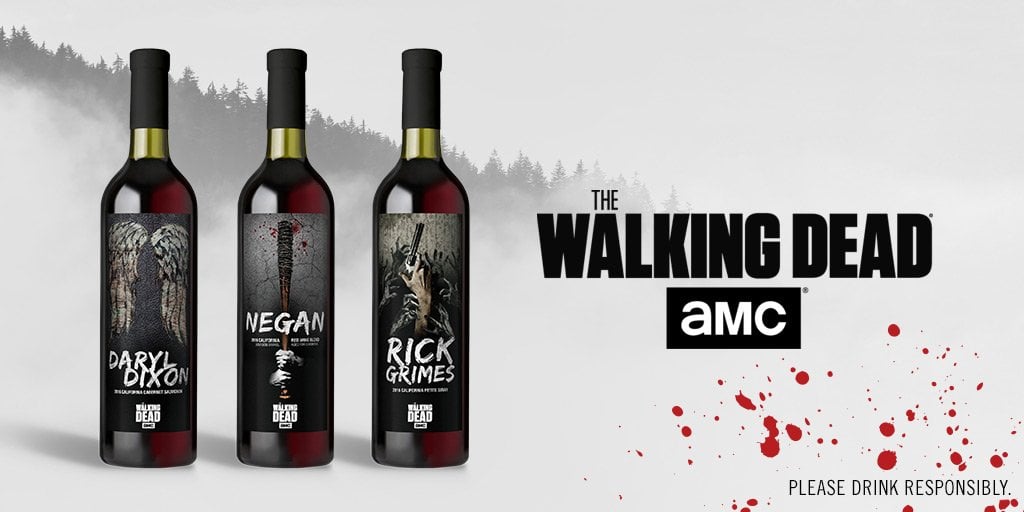 Nothing goes better with a bloody episode of The Walking Dead than a glass of red wine . . . except maybe a glass of Rick Grimes red wine. Thanks to a new line of The Walking Dead-themed wines from Lot 18, you can pour yourself a tall glass of Rick (or Daryl or Negan), depending on your mood. The line of wines — all red, naturally — launched on Nov. 6 and is available for purchase online, so serious fans of The Walking Dead should stock up ASAP while they can! Check out Lot 18’s full descriptions of each wine, priced at $22 per bottle or $59 per trio, to see which one you’ll choose to help you get through the zombie apocalypse.

2016 Daryl Dixon Cabernet Sauvignon ($22): “Resourceful, fearless and capable of handling both the dead and the living, Daryl Dixon is a loner and man of few words, but his loyalty to the group is immediately apparent to anyone he encounters. This California Cabernet Sauvignon is similarly reliable, showing depth and an attractive core of ripe black fruits, intermingled with savory nuances of coffee bean and dried herbs.”

2016 Rick Grimes California Petite Sirah ($22): “Whether he’s fighting off a herd of walkers or rallying communities to defend against the Saviors, Rick Grimes is undoubtedly the leader of the group, just as this Petite Sirah would command the attention of anyone who tastes it. Like Rick, this red is a true crowd pleaser — bold, dark and balanced, exhibiting a notable tension between the bright acidity and firm, tannic structure.”

2016 Negan California Bourbon Barrel Red Blend ($22): “Negan is the man we all love to hate, but you have to respect his uncompromising style. This red blend is also brawny and bold, creating devotees with its robust, extracted flavors of vanilla, dark chocolate, and caramel. A portion of the wine was aged for three months in barrels. Composed of 73 percent Merlot, 18 percent Zinfandel and 9 percent Petite Sirah, this is a wine that packs a punch harder than Lucille’s, compelling you through the apocalypse and beyond.”

Pour Yourself a Tall Glass of Rick Grimes Thanks to The Walking Dead’s New Wine added by Newsroom on November 10, 2017
View all posts by Newsroom →