By Newsroom on October 27, 2017Comments Off on Zoe Saldana Scorches In Red As Star Of 2018 Campari® Red Diaries

Campari®, Italy’s iconic bittersweet red aperitif, today announces the return of Campari Red Diaries, the series of short films focused on the notion that “every cocktail tells a story.” The 2018 release features a hallmark short movie steeped in intrigue, leading viewers on a journey in pursuit of the perfect cocktail.

The Legend of the Red Hand stars globally renowned actress Zoe Saldana, known for her roles in Avatar and Guardians of the Galaxy, and is directed by Stefano Sollima, regarded for his work in Italy on Gomorrah and the upcoming movie, Soldado. In its second year running, Campari Red Diaries celebrates worldwide bartending talent as well as the film’s “Red Hands,” masters of the world’s best cocktails.

This short film follows the international success of the 2017 edition of Campari Red Diaries, which featured actor Clive Owen as a notorious bartender in a short titled The Killer in Red. This year’s celebration is another thrilling mystery that tells the story of Mia Parc, played by Zoe Saldana, and her search for the perfect cocktail. Her journey begins in none other than Milan, the birthplace of Campari.

Director Stefano Sollima creates a tense and captivating story that showcases his expertise in the thriller film genre; he takes viewers on a riveting adventure around the world, while Saldana exudes glamour and finesse in her role alongside Italian actor, Adriano Giannini, the male lead who portrays Mia’s love interest, Davide. 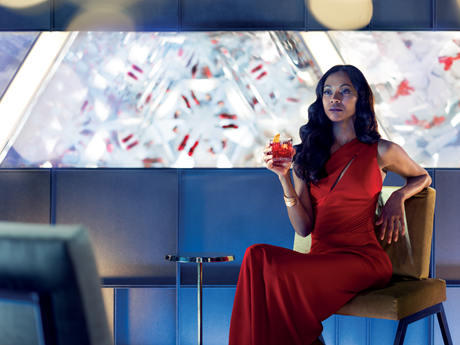 On participating in the film, Zoe Saldana comments, “The Campari Red Diaries campaign has a great legacy, so I was delighted to play the role of Mia Parc inThe Legend of Red Hand. Mia’s character and her sheer determination to reach perfection was a fascinating one to play. Bringing this to life in Milan as the birthplace of Campari, the iconic Italian aperitif, was very special.”

On the creation of the short movie, Stefano Sollima comments: “Directing The Legend of Red Hand short movie and working alongside such talent as Zoe Saldana and Adriano Giannini was a pleasure. Being Italian, Campari is an iconic brand that has been present throughout my adult life, making it an easy choice to collaborate with. The campaign and the story allows such creativity to create a world of mystery that captivates the viewer and leaves them wanting more.”

Bob Kunze-Concewitz, Chief Executive Officer of Gruppo Campari noted: “This year, our Campari Red Diaries campaign takes a new and interesting turn; we are demonstrating Campari’s ambition for creating the perfect cocktail whilst continuing the celebration of talent in the art of bartending around the world. We are thrilled to have Zoe Saldana, Stefano Sollima and Adriano Giannini at the heart of the movie and look forward to launching the full film and taking our fans on the journey to discover what lies beyond The Legend of Red Hand.”

On his role as Davide, Adriano Giannini adds: “Working with Zoe Saldana and Stefano Sollima on The Legend of Red Hand has been an absolute pleasure, especially on a short movie for a brand with such rich Italian heritage. Playing Davide, a character named after the founder of Campari, was a great responsibility, and I am excited for viewers to find out more next year.”

The Legend of Red Hand will be digitally launched globally in 2018 and celebrated with a red carpet premiere in the place where it all began: Milan. The short movie will also be available on Campari’s official YouTube channel on the same date. Along with the short film and accompanying premiere in Milan, Campari Red Diaries 2018 will be supported with cocktail recipes from legendary bartender talent from around the world, as well as a coffee table book that immortalizes The Legend of Red Hand.

Zoe Saldana Scorches In Red As Star Of 2018 Campari® Red Diaries added by Newsroom on October 27, 2017
View all posts by Newsroom →