By Newsroom on January 7, 2013Comments Off on Ali Landry reveals Doritos’ Crash the Super Bowl finalist 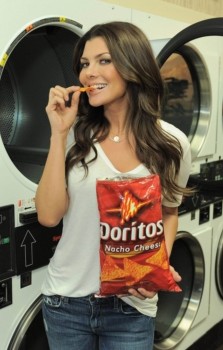 Iconic “Doritos Girl” Ali Landry, who rose to fame 15 years ago by starring in a Doritos Super Bowl ad, reunited with the Doritos brand once again when she announced the five finalists for this year’s Doritos Crash the Super Bowl contest.

Selected out of thousands of entrants, the five finalists will now compete for the chance to have their ads air during the Super Bowl XLVII broadcast on Feb. 3, 2013.

The five Crash the Super Bowl finalist ads (in alphabetical order by finalist last name) are:

Two ads will air — one selected by America’s votes and one by the Doritos brand team. The finalist whose ad scores highest on the USA TODAY Ad Meter rankings will be awarded the career-changing opportunity to work with acclaimed film director Michael Bay on the next installment of the blockbuster “Transformers” movie franchise, along with a shot at a $1 million bonus.

This marks the seventh year in a row consumers have created Super Bowl ads for Doritos, one of the flagship brands from PepsiCo’s Frito-Lay division.

Doritos fans can vote each day for their favorite Doritos commercial on the Doritos Crash the Super Bowl-branded app on the Doritos Facebook Page and on the Facebook mobile app from January 4 to January 29.