By Newsroom on January 21, 2013Comments Off on BECK’S SAPPHIRE Opens Pop-Up “Jewellery Store” 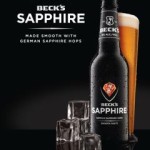 The brand will open three additional spaces in the most prized real estate locations across the United States, including SoHo in New York City, on Michigan Ave. in Chicago and along South Beach in Miami.

All of the BECK’S SAPPHIRE pop-up “jewellery stores” will showcase a unique art installation designed by Moritz Waldemeyer , the famed German designer and engineer.

“Beck’s Sapphire has been well received by consumers at events from coast to coast. It took our engineers more than two years to develop this smooth of a beer and our exclusive black bottle,” said Chris Curtis , brand manager, Beck’s.

“The pop-up space gives us an opportunity to showcase Beck’s Sapphire to our friends in Los Angeles in a truly special way. We invite new and old friends across L.A. to stop by and see this celebration of German beer and German innovation.”

The rest of the world will be introduced to BECK’S SAPPHIRE during the Super Bowl on February 3, the largest stage in advertising.