By Newsroom on November 27, 2012Comments Off on Chakra wins ‘Best Newcomer’ at British Curry Awards 2012

The former owners of Vama in the Kings Road are now working their magic in Notting Hill and for their latest venture Chef Andy Varma has added another dimension in his interpretation by invigorating the positive energy with food from different schools of great Indian cooking, balanced through the use of technique, marination, kitchen skills & spices.

Andy has emphasised the ‘royal’ cooking styles of the Indian courts. Chefs at Indian palace kitchens in the 1800s were a feisty lot and competition was fierce where culinary boundaries were pushed to the limit. Live birds flying out of puffed puris, pulaos made from pistachio nut slivers instead of rice, and a folly of a feast made from caramel provided wacky and entertaining diversions. It is with this knowledge that Andy travelled extensively through India from the City of Nawabs in Lucknow where the Royal Kitchens were highly evolved, to the Punjab Kitchens in Patiala which offered incredible and diverse cooking.

Chakra’s inspiration comes from ancient Vedic scriptures. The Chakras, or our energy points are thought to vitalise the physical body, associated with positive flow of energy and the interaction of a physical emotional and mental nature – balancing mind body and soul.

Andy brings his interpretation of The Chakras by invigorating the positive energy with food from different schools of great Indian cooking, balanced through the use of marinating adding his technical expertise in kitchen skills and spices.

In the Royal Palaces the gourmet chefs invented the concept of regal ‘plates’ or platters for sharing and Andy re-creates this traditional way of ‘running’ the food from pan to table. With a unique menu designed to share, it combines seven schools of cooking, each containing recipes that have evolved throughout the centuries. Typically, 1 or 2 dishes should be ordered to share from each section, to try different cooking preparations and different techniques or ‘schools’ of Royal Indian origins.

Chakra has also combined great wines and cocktails along with attentive and friendly service lead by their head of operations Taimur Khan under the watchful eye of Arjun. The young and energetic team has a thorough knowledge of the cuisine, its provenance and encourage the diners to enjoy dishes from each region.

The winners in full at British Curry Awards 2012 or “Curry Oscars”: 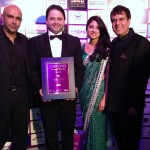