By Newsroom on February 4, 2013Comments Off on Consumer-Created Doritos Ads Crash The Super Bowl Ad Stage 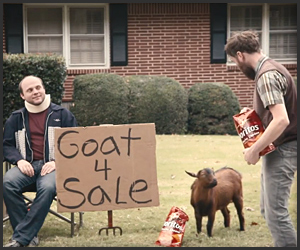 The Doritos brand gave two fans the opportunity to showcase their filmmaking talent on the world’s biggest advertising stage when it aired their consumer-created Doritos commercials during tonight’s Super Bowl XLVII broadcast.

Depending on how the spots rank on the USA TODAY Ad Meter, either fan could win a $1 million bonus prize and the career-changing opportunity to work with acclaimed film director Michael Bay on the next installment of the blockbuster “Transformers” movie franchise from Paramount Pictures and Hasbro, set to be released on June 27, 2014. T

his marks the seventh year in a row consumers have created Super Bowl ads for Doritos, one of the flagship brands from PepsiCo’s Frito-Lay division.

The two ads that aired were (in alphabetical order by finalist last name):

“We’ve always felt that the Doritos brand should be shaped by its fans, and we’re proud to give them this unmatched stage and one of the boldest opportunities possible to spotlight their talents year over year,” said Ram Krishnan, vice president of marketing, Frito-Lay North America. “We are so proud of our finalists and can’t wait to see how they stack up on the Ad Meter rankings.”

“Both of these Doritos spots are original and creative, and I’m really looking forward to working with one of the winners,” said Bay, who began his career as a creative force in the advertising world and is now one of Hollywood’s boldest and most bankable feature film directors with a repertoire that includes such blockbuster hits as the “Transformers” franchise, “Armageddon,” “Pearl Harbor,” “Bad Boys” and “The Rock.” 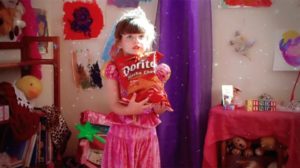 From here, the Crash the Super Bowl program enters its final phase as the creators of the two winning Doritos ads wait to see how they stack up in the USA TODAY Ad Meter, competing against all ads that aired during the Super Bowl XLVII broadcast. The Ad Meter payouts are as follows:

Since Crash the Super Bowl began in 2007, consumer-created Doritos ads have consistently ranked within the top-five spots of the USA TODAY Ad Meter, and three of the last four years they have scored the No. 1 ranking.

Callner, an Atlanta-based freelance director, came up with the idea for “Goat 4 Sale” after his goat-owning friend said, “It’s funny when my goats eat crunchy food.”  The spot is about an unlikely friendship between a bearded man and a Doritos-eating goat. The pair shares a love for Doritos chips, until the goat’s constant crunching gets on the bearded man’s last nerve.

Freiburger, a freelance director, spent just $300 to create “Fashionista Daddy.” The spot tells the classic story about a father’s love for his daughter – and Doritos chips. A dad gets roped into playing “Princess Fashion Show” with his daughter after she promises him a bag of Doritos chips in return. Once his friends catch him eating the chips in his “Fashion Show” dress and makeup, they join in on the fun.