By Newsroom on October 26, 2015Comments Off on Do Aliens Love KFC Too? Giant Corn Maze Features Colonel Sanders’ Image 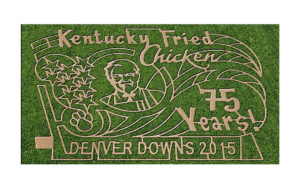 Just in time for the Halloween season, KFC is honored to announce the Colonel Sanders themed Corn Maze created by Denver Downs Farm, in Anderson, SC. Honoring the 75th anniversary of the Original Recipe chicken, the ten-acre maze, brainchild of a local KFC franchisee, is a place where children and adults can test their wits in a challenge to circumnavigate their way through a maze shaped in the image of Colonel Sanders’ face.

How exactly did this giant corn maze come together? Did aliens invade the farm overnight? Turns out, it was the hard work of the Denver Downs Farms family, who have been eating KFC Original Recipe for as long as they can remember.

“Denver Downs Farm is a local hot spot for families which sees tens of thousands of visitors each fall, and will be open through November 1, 2015,” said KFC franchisee Jake Rasor III, who runs KFC stores in South Carolina and Georgia. Along with his in-laws, the Garrisons – owners of Denver Downs Farm – the group spent months planning out the maze concept. “No small feat, the corn was planted in July before being transferred to the field in early August. Over the next couple of months, the corn grew to about 10 feet to create the complex labyrinth of twists and turns.” 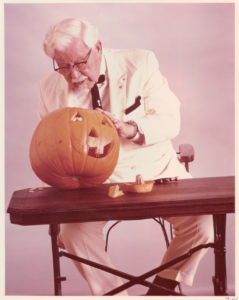 “First it was Daryl Hammond, next Norm MacDonald, and now our Colonel is being played by a corn field,” says KFC US chief marketing officer, Kevin Hochman. “Customers thought the Corn Maze Colonel’s acting was a little stiff, but it gave us a great excuse to talk about our new $5 popCORN chicken Fill-Ups available Monday at a KFC near you.”

The KFC’s social channels will also be highlighting customized Colonel Sanders trick-or-treat buckets, and the best and worst Colonel Sanders Halloween costumes on the web.

The news doesn’t stop there. KFC customers will be able to purchase the KFC’s latest menu addition, now featuring Popcorn Nuggets as part of the hugely popular $5 Fill Ups. The tasty 100% white meat, extra crispy nuggets have been available nationwide in the US since February 2015, and now customers can pick them up along with a side, biscuit, cookie and a medium drink, all for just $5.