By Newsroom on October 23, 2015Comments Off on Domino’s Launches Purpose-Built Pizza Delivery Vehicle 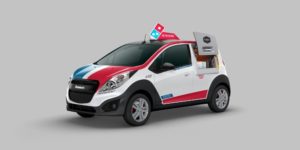 In its latest innovation Domino’s is launching the Domino’s DXP (Delivery Expert), a specially designed and built pizza delivery vehicle. The DXP is the combined brainchild of former GM R&D executive Kenneth R. Baker, Michigan-based Roush Enterprises and Domino’s. To also include consumers’ input, hundreds of concepts were initially identified in an online crowdsourcing design competition hosted by Local Motors.

“The Domino’s DXP is the first purpose-built vehicle aimed at revolutionizing pizza delivery,” said Russell Weiner, president of Domino’s USA.  “This innovation allows drivers to do their jobs with greater ease and efficiency, and demonstrates that Domino’s is absolutely fanatical about making perfect deliveries.”

The Domino’s DXP also represents a collaboration among three great Michigan brands: Domino’s, Roush and General Motors. “As a 55-year-old company born in Michigan, it is an honor to be able to partner with other great Michigan companies to produce the DXP,” said Weiner.

The design and production of the Domino’s DXP took over three years.  It was born out of Domino’s passion for innovation and started with a five-stage crowdsourcing competition hosted by Local Motors, on the company’s open innovation platform called Open IO. The contest, called the Domino’s Ultimate Delivery Vehicle Challenge, fielded 385 entries from designers around the world. Then, Roush and Baker adapted the concept and worked closely with Domino’s to transform the Chevrolet Spark (with its international style, tech-savvy command deck and nimble maneuverability) into a delivery vehicle for pizza and other menu items – ensuring hot and great tasting pizzas delivered right to your door. 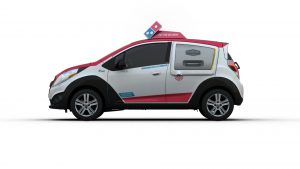 Domino’s is working with Roush Enterprises to convert and deliver 100 DXPs to 25 markets across the US, including major rollouts in Boston, Dallas, Detroit, Houston, Indianapolis, New Orleans, San Diego and Seattle over the next 90 days. Domino’s has contracted with Chevrolet dealers in the cities where DXP vehicles are being launched to deal with the nuances of the DXP, from ovens to accessories.  These dealers will also partner with franchisees to hold local launch events to introduce the DXP in select markets.

Pizza delivery represents roughly two-thirds of Domino’s business and the DXP represents the latest innovation in this space. In the U.S. alone, Domino’s delivers about 400 million pizzas a year and delivery drivers cover roughly 10 million miles each week – equivalent to 21 round trips to the moon.  Over the years, Domino’s has revolutionized pizza delivery with other innovations including the corrugated pizza box, Domino’s Tracker , the Heatwave bag and ordering by text, Twitter and emoji.

Consumers spotting DXP vehicles can share their sighting via social media using the hashtag #DXP. More information about the DXP can be found at this site created by Domino’s advertising agency CP+B, who were integral partners in the design and launch of the DXP. 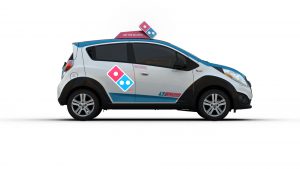 Its 1.2 liter engine makes the I-4 engine car fun to drive.  With an EPA estimated 39 MPG highway, the DXP will provide the kind of economics franchisees welcome.  The DXP features a continuous variable automatic transmission that adapts seamlessly to driver throttle input and speed for a comfortable ride.

“Even though Domino’s deliveries will still primarily be made in the personal cars of delivery drivers,” said Weiner, “the Domino’s DXP represents an innovative leap into the 21st century and takes delivery to a new level of efficiency and quality.”