By Newsroom on February 20, 2013Comments Off on Edible Arrangements To Help Veterans Become Business Owners 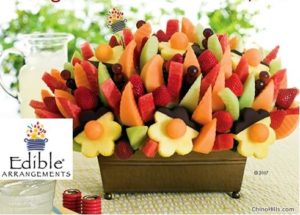 Edible Arrangements will contribute $125,000 to VetFran, the IFA’s program through which franchise companies help military veterans make the transition to civilian life.

In addition, Edible Arrangements will launch its own “Hero’s Welcome” program this year. The program, part of the company’s Edible Cares umbrella initiative to give back, will be designed to provide special support to help veterans become franchisees.

It will include specialized training, a franchise fee discount and mentoring from existing Edible Arrangements franchisees who are also veterans.

In addition, Edible Arrangements has set a goal of providing job opportunities and a career path for an additional 1,000 veterans throughout its franchise locations nationwide.

“The brave men and women of our military are the ones who have made it possible for each of us to enjoy the American Dream,” Farid said. “I believe it is our obligation to help those who have sacrificed so much by doing what we can to give them the tools and support to achieve that dream themselves.”

Through the IFA, Farid also is participating in a new Veterans Business Accelerator program established by the Department of Veterans Affairs, which will provide free courses and resources for all veterans interested in entrepreneurship including providing financial support to wounded veterans doing the coursework.

Farid has taped a video for use in the program in which he discusses how he founded Edible Arrangements as a teenager, and then he and his brother, Kamran, turned it into the international leader in fresh fruit arrangements with more than 1,100 locations worldwide.

Within the Edible Arrangements system, former veterans own and operate some of the most successful franchise locations.

“I know from personal experience within our own system that veterans bring an exceptional level of passion and discipline to their business,” Farid said. “I also know that they often face employment challenges once their service to their country is complete.”

The IFA’s VetFran program was born out of the desire of the late Don Dwyer Sr., founder of The Dwyer Group, as a way to say “thank you” to veterans returning from the first Gulf War.

IFA President and CEO Steve Caldeira said the IFA is excited about the new opportunities created by the support of Edible Arrangements.

“Edible Arrangements’ contribution to IFA’s VetFran initiative is truly awe-inspiring and will help to strengthen the franchise industry’s efforts to further support veteran entrepreneurship and employment,” Caldeira said. “We are extremely grateful to Tariq Farid for his outstanding leadership and support of our nation’s veterans.”