By Newsroom on October 26, 2017Comments Off on Fuller’s launches Limited-Edition Vintage Ale 2017 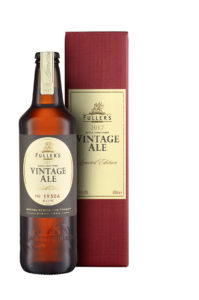 Fuller, Smith & Turner P.L.C., the London brewer and premium pub company, has released its 2017 edition of Vintage Ale, the annual limited-edition brew made using this year’s cream of the crop when it comes to ingredients.

All bottles are individually numbered and will be available from Fuller’s Brewery Shop in Chiswick, online at https://shop.fullers.co.uk/products/vintage-ale-2017 and in Waitrose.

The 2017 Vintage Ale (8.5%ABV), is the 21st edition in the range and has been created by Fuller’s recently promoted Head Brewer, Georgina Young. In the spirit of all things new, this brew uses a malt and hop combination never seen before in a Fuller’s beer. Pouring a deep amber colour, Vintage Ale 2017 opens with distinctive citrus aromas from the Denali hop, an experimental American hop variety. It has been used both late in the boil and for dry-hopping, dovetailing the classic British hop varieties Target and Goldings. This brew also includes a new malting barley – a British variety called Laureate. New malt varieties do not come along very often, so it seemed fitting to use this one alongside a new American hop for this year’s Vintage Ale.

Fuller’s Head Brewer George Young said: “I am honoured and privileged to be able to put my signature on this year’s Vintage Ale and carry on its legacy.

“As with every Vintage Ale, I am extremely excited to see how these new ingredients work together as the flavours of this bottle conditioned beer develop over time. Bottle conditioning means that a little yeast is left in the bottle, which will mature slowly over the years like a fine wine or whisky – well beyond the ‘best before’ date that we are obliged to state.”