By Newsroom on May 22, 2015Comments Off on KFC Resurrects ‘The Colonel’ After 20-Year Hiatus

Fried chicken giant KFC has resurrected Colonel Sanders for its latest TV ad in the US.

It is the first time the Kentucky Fried Chicken founder will feature in the fast food brand’s advertising for two decades, marking a step change in brand communications.

“Colonel Sanders is back, America! He’s back to make sure his Kentucky Fried Chicken is still as delicious as it ever was. And he made this commercial about it,” KFC quips on its brand YouTube site. 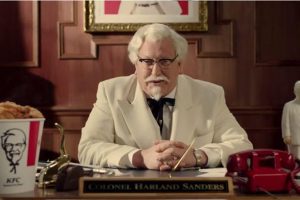 “I’ve been gone for a while and boy, howdy, how things have changed,” he says. “Nowadays you’ve got your international space station, your double sided tape… but what you don’t always seem to have these days is my Kentucky Fried Chicken!”

He says KFC is “still finger lookin’ good”, the strapline that the brand ditched from its marketing in 2011 and replaced with “so good.”

In the UK, KFC has been focusing on injecting more emotion in its advertising as it celebrates its 50th anniversary.

KFC Resurrects ‘The Colonel’ After 20-Year Hiatus added by Newsroom on May 22, 2015
View all posts by Newsroom →