By Newsroom on November 13, 2013Comments Off on Michelin Releases Fourth Edition Of Its Famed Guide To Chicago’s Great Restaurants 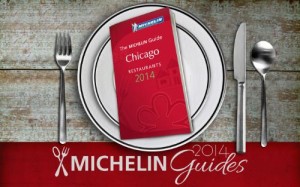 Michelin announced its highly regarded star selections for the fourth edition of the Michelin Guide Chicago, which goes on sale on November 14.

This year, two restaurants join the two-star category: Sixteen and Grace. Sixteen, which earned its first star last year, is being elevated from one to two stars. The restaurant is situated in the Trump International Hotel. Its chef, Thomas Lents, serves a creative contemporary cuisine. At Grace, located on West Randolph, chef Curtis Duffy serves an elegant cuisine with a contemporary style that is both imaginative and innovative. With these restaurants, the 2014 guide now counts four two-star establishments, including L20 and Graham Elliot, which maintained their standing from 2013.

In the one-star category, five restaurants earned their first stars this year, including El Ideas, The Lobby and North Pond, a local favorite where chef Bruce Sherman serves a truly imaginative American cuisine. Also distinguished this year, Elizabeth offers creative cuisine at the hands of chef Iliana Regan. In the restaurant Senza, chef Noah Sandoval combines artistry and finesse in his cooking to create a healthy and gluten-free cuisine.

Chicago’s perennial three-star restaurant Alinea maintained its status in the 2014 guide. A Michelin three star rating is considered the ultimate international recognition in the culinary world with only just over 100 restaurants around the world currently holding this prized distinction.

“The cuisine in Chicago is innovative and particularly open minded,” said Michael Ellis, international director of the Michelin Guides.  “The culinary scene is very different from New York or San Francisco as chefs have created their own contemporary style based on influences with molecular cuisine. The result is a remarkably high level of creativity.”

The mere inclusion in the Michelin Guide Chicago 2014 is an acknowledgment of culinary quality. A total of 405 restaurants are included in the selection, spread throughout Chicago’s downtown neighborhoods and surrounding suburbs. Michelin inspectors embraced a total of 47 different cuisines this year, reflecting the tremendous diversity found across the region.

The release of the Michelin Guide Chicago 2014 comes a few days after Michelin announced that 69 area restaurants earned the distinction of Bib Gourmand. These Bib Gourmand establishments offer two courses plus a glass of wine or dessert for $40 or less (excluding tax and gratuity) and are known as the Michelin inspectors’ favorites for good value.

Michelin Releases Fourth Edition Of Its Famed Guide To Chicago’s Great Restaurants added by Newsroom on November 13, 2013
View all posts by Newsroom →