By Newsroom on September 12, 2014Comments Off on PepsiCo Launches Anti-Bullying Campaign “Purple On!”

PepsiCo announced a “Purple On!” campaign against bullying. The campaign supports GLAAD’s annual Spirit Day on October 16, which inspires millions of Americans to wear purple to take a united stand against bullying and show support for lesbian, gay, bisexual and transgender (LGBT) youth. PepsiCo is the official food and beverage sponsor for Spirit Day.

“PepsiCo is deeply committed to building a workplace environment where all of our associates can bring their whole selves to work and are empowered to reach their full potential,” said PepsiCo Chairman and CEO Indra Nooyi. “That’s why we are pleased to partner with GLAAD in support of Spirit Day, which fosters a spirit of inclusion in our communities.”

“PepsiCo leads by example and is a true ally of the LGBT community and our organization,” said GLAAD President and CEO Sarah Kate Ellis. 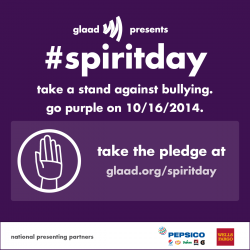 As part of the campaign, PepsiCo is encouraging its employees to wear purple on Spirit Day and to share with their family members, friends and communities GLAAD’s anti-bullying messages and resources. This content, designed for educators, parents and students, is available here. PepsiCo also is activating a social media campaign using the hashtags #SpiritDay and #PurpleOn.

Additionally, Patrick McLaughlin, Senior Vice President of Human Resources for PepsiCo’s Frito-Lay North America Division, will be among the speakers at GLAAD’s 2014 Game Changers! Gala in San Francisco on September 13.

PepsiCo Launches Anti-Bullying Campaign “Purple On!” added by Newsroom on September 12, 2014
View all posts by Newsroom →