By Newsroom on October 29, 2015Comments Off on Runners Lace-up & Rock Out for a Cause at Run Hard Rock Cafe 5/10K Race 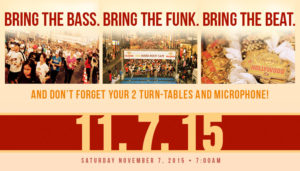 Runners get ready to rock – as Hard Rock’s Run Hard Rock Cafe 5/10K to benefit My Friend’s Place takes to the streets of Los Angeles for a third consecutive year. 2015’s race, takes place on Saturday, November 7, 2015, and will, for the first time, give runners the option of extending their run to a 10K race. Those looking to participate can register online here. Run Hard Rock Cafe 5/10K gives runners, walkers and rockers alike the chance to run alongside the imprints of legends on the famous Hollywood Boulevard, while simultaneously giving back to the local community.

In honor of National Runaway and Homeless Youth Awareness Month in November, a portion of proceeds from every Run Hard Rock Cafe registration fee will benefit My Friend’s Place, a local nonprofit dedicated to assisting and inspiring homeless youth to build self-sufficient lives. The organization’s headquarters on the race course make its location and Hollywood community affiliation an integral part of Run Hard Rock Cafe 5K and 10K. 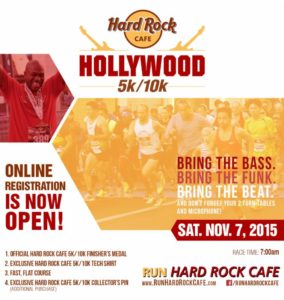 “Hard Rock Cafe has become a tremendous partner in our mission to serve our homeless youth community and we are honored to be a part of Run Hard Rock Cafe for the third year in a row,” said Heather Carmichael, Executive Director of My Friend’s Place. “We hope the race will continue to bring awareness to the homeless youth crisis that exists in Hollywood.”

“We are excited to expand the 5K race to include a 10K this year to bring out more members of the community to benefit My Friend’s Place,” said Selin Demren, Senior Sales & Marketing Manager of Hard Rock Cafe Hollywood, Calif. locations. “We look forward to seeing all the race participants and crown the winners right outside our front door on Hollywood Boulevard.” 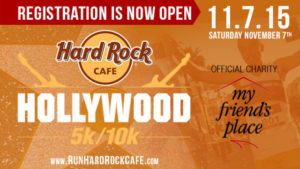 Runners Lace-up & Rock Out for a Cause at Run Hard Rock Cafe 5/10K Race added by Newsroom on October 29, 2015
View all posts by Newsroom →