Sainsbury’s gear up for the festive frenzy

By Newsroom on December 14, 2012Comments Off on Sainsbury’s gear up for the festive frenzy

More than 2,000 of Sainsbury's corporate office workers from all over the UK, will help out their colleagues in their various stores over the busy festive period. 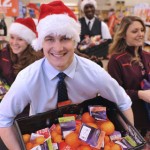 Everyone from store support centers, including board members and directors, will be rolling up their sleeves to help keep the shelves fully stocked, as the supermarket gears up for its busiest trading days of the year – Friday 21 to Monday 24 December.

The company’s suppliers are also joining in. Over 300 people from 107 different suppliers have pledged an additional 400 days of help – taking it up to 4,900 days of extra support.

The 23rd of December is traditionally the busiest day of trading for Britain’s supermarkets. But given that this year it falls on a Sunday, organizers expect a chaotic run up to Christmas.

Sainsbury’s gear up for the festive frenzy added by Newsroom on December 14, 2012
View all posts by Newsroom →