By Newsroom on January 30, 2013Comments Off on Verve Energy Drink Premieres at Sundance Film Festival 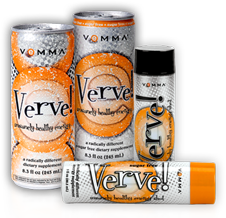 Alongside world premiere independent films, Verve made its debut to the film world elite at the 2013 Sundance Film Festival held in Park City, Utah, from January 17-27.

As a sponsor of the Project Green Music Lounge, Verve not only helped support the nonprofit’s mission to protect green space for future generations and fund Back-to-Basics Summer Camps for under-served children, but it also energized Sundance attendees, from A-list celebrities and film industry executives, to VIP moviegoers.

Verve was shared with Hollywood elite such as Nicole Kidman, Matthew McConaughey, Naomi Watts, Alicia Keys, Jennifer Hudson, Kristen Bell, Jane Lynch and others, who received Verve and Verve Zero Sugar to enjoy at the festival.

Lending its dazzling design to the spectacular Park City backdrop, Verve was spotted on MTV News interviews with Joseph Gordon-Levitt and Tony Danza, as well as Director Robert Rodriguez, who returned to Park City to celebrate the anniversary of his cult classic, “El Mariachi.”

BK Boreyko, Vemma Founder and CEO, commented, “Verve is a fresh and dynamic brand that fits perfectly with the excitement and energy at Sundance. We were honored to participate in this year’s festival and happy to support Project Green and their efforts to promote healthy kids and a healthy environment.”

Sundancers also got a sneak peak at Verve Bold, the newest product in the Verve Energy Drink line, which launches January 30. Verve Bold has 50% more energy and 70% less sugar than the original Verve formula, plus no artificial sweeteners, a low-carb profile, and just 5g of natural sweeteners per serving.