By Newsroom on February 8, 2013Comments Off on Young Hollywood & Subway Team Up For Exclusive Re:FRESH Series 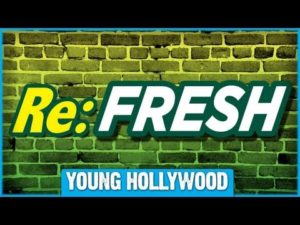 The series recaps one-of-a-kind moments that happen each week in the world of film, TV, fashion, music, and sports, featuring highlights of Young Hollywood’s exclusive video content with the biggest stars in pop culture.

Segments have a fresh positive spin and include compelling and outrageous celebrity sound bites from Young Hollywood interviews, fashion trends, and crazy tidbits from the past week.

A new episode airs each Friday for the 12 week run of the series. Already planned are special-themed episodes taking place from NATPE, Super Bowl and SXSW. The show includes categories such as “Fresh Take,” “Fresh Artist,” “Fresh Show,” or “Fresh Find.”

The second installment of the Young Hollywood Re:FRESH powered by SUBWAY show includes a studio chat with the cast of GLEE, a major hip-hop superstar, a house visit with an NFL Pro Bowl player, an acoustic performance from one of the X Factor finalists, and the star of one of TV’s hottest shows.

This series comes on the heels of Young Hollywood’s One Year Anniversary as part of YouTube’s Original Channel Initiative.

Since launching the Young Hollywood Network, the channel has received an average of 2 million views per week and has been recognized by AdAge as YouTube’s #1 Celebrity news channel on their Original Channel Tracker.

Young Hollywood & Subway Team Up For Exclusive Re:FRESH Series added by Newsroom on February 8, 2013
View all posts by Newsroom →