By Newsroom on January 3, 2014Comments Off on 1,000-Pound Butter Sculpture Revealed at Pennsylvania Farm Show

A sculpture made from nearly 1,000 pounds of butter was unveiled at the Pennsylvania Farm Show, celebrating the 60th anniversary of the show’s iconic milkshake served by the Pennsylvania Dairymen’s Association.

The sculpture, sponsored by Mid-Atlantic Dairy Association and Pennsylvania Dairy Promotion Program, takes its cue from the number one song in 1954, “Shake, Rattle and Roll” and features a family enjoying a delicious milkshake while watching a cow couple “shake.”

“For 60 years, milkshakes have been part of the Farm Show tradition of celebrating Pennsylvania agriculture,” said Greig. “What may seem like just a great drink in a plastic cup is a lot more – it’s a representation of the state’s 7,200 dairy farm families who grow Pennsylvania by driving the economy, creating jobs and supplying quality products to consumers.”

Greig added that dairy is the largest segment of Pennsylvania’s agriculture industry, with milk production alone contributing nearly 35 percent of all agricultural income at more than $2.3 billion. Dairy farmers spend nearly 85 percent of their income close to home. 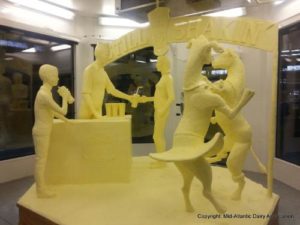 “The Dairymen’s milkshakes are a fun and delicious way for everyone to enjoy milk,” said Lesher. “Sculpting the milkshakes in butter joins together everyone’s two favorite Farm Show traditions – the butter sculpture and a Farm Show milkshake.”

The Pennsylvania Dairymen’s Association, together with the Valley Grange #1360 from Lewisberry, serves 140,000 of the vanilla, chocolate and mixed milkshakes each year in the show’s famous Food Court and Food Court Annex. Proceeds benefit scholarships, youth programs and agricultural education programs across the state.

“The Dairymen’s milkshake is a great dairy product that has had phenomenal growth in popularity, and we are extremely proud to have the butter sculpture commemorate the 60th anniversary of our milkshake,” said Smith.

Crafted by Jim Victor of Conshohocken, Montgomery County, the butter sculpture creation begins in mid-December and is finished in time for the Farm Show. Victor also creates sculptures using chocolate and cheese.

At the close of the show, the butter, donated by Land O’ Lakes in Carlisle, Cumberland County, will be given to a Juniata County dairy farm. The butter will be put through a digester and converted to about 65 kilowatt hours of electricity to help operate the farm.

The Pennsylvania Farm Show is the largest indoor agricultural event in the nation, with 24 acres under one roof that feature nearly 6,000 animals, 10,000 competitive exhibits and 300 commercial exhibitors. Admission is free and parking is $10.