A Controversial Pizza Billboard In New Zealand, Made From Real Rabbits

By Newsroom on April 14, 2014Comments Off on A Controversial Pizza Billboard In New Zealand, Made From Real Rabbits 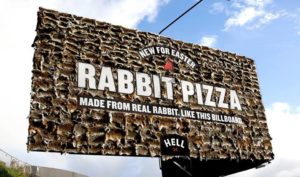 To promote its new rabbit pizza, New Zealand-based pizza company Hell Pizza created an attention-grabbing billboard that was made from hundreds of real rabbits.

“Rabbit Pizza,” the billboard advertised. “Made from real rabbit. Like this billboard”.

“As well as being a delicious meat, and even quite cute, rabbits are unfortunately also a noted pest that is damaging to the New Zealand environment, particularly in the South Island,” said Hell Pizza in a Facebook post, defending its controversial billboard.

“For those who are concerned, we sourced these rabbit skins via a professional animal tanning company, who in turn sourced them from local meat processing companies where the skins are a regular by-product.”

A Controversial Pizza Billboard In New Zealand, Made From Real Rabbits added by Newsroom on April 14, 2014
View all posts by Newsroom →