By Newsroom on March 1, 2013Comments Off on A Winemaker’s 30 Year Quest Helps Fulfill His Father’s Vision

Over the past 30 years, Willamette Valley Vineyards Founder and native Oregonian, Jim Bernau, has been on a quest to naturally grow all of his barrel-aged Pinot noir. The 2010 vintage of the winery’s Estate Pinot Noir is the fruition of that quest.

In 1961, the first winemaker to immigrate to Oregon, Richard Sommer, hired an Oregon attorney to do the legal work necessary to establish the first Oregon winery since Prohibition. The attorney’s son was Jim Bernau. 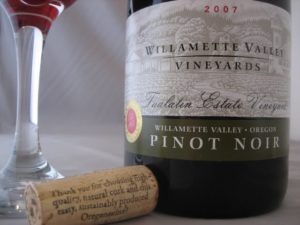 Jim started dabbling with home wine-making when he was only 10 years old after his Dad brought home some of Richard’s wine for dinner.

“My brother and I used to ferment Concord grape juice in some of our first winemaking attempts,” Jim laughs.

Years later in 1983, using a small tractor, Jim cleared away blackberry vines, scotch broom and remnants of an old plum orchard in the south Salem hills in Oregon.

Jim believed that this particular site, on a west-southwest volcanic flow, was ideal for growing Pinot noir.

“I didn’t have a lot of money back then so I was ecstatic to find a sale on garden hoses at Fred Meyer,” says Jim. “My neighbors knew I was dedicated when I watered over 1000 feet of vine rows by hand!”

“When I first started, I wasn’t able to grow all of my own fruit,” says Jim. “As the demand for my Pinot noir grew, I had to source from a number of different growers.”

A Winemaker’s 30 Year Quest Helps Fulfill His Father’s Vision added by Newsroom on March 1, 2013
View all posts by Newsroom →