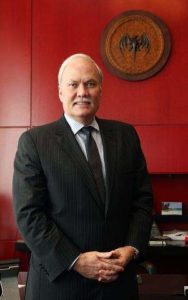 The Board of Directors of Bacardi Limited, the largest privately held spirits company in the world, announced the departure of president and chief executive officer Ed Shirley. Mr. Shirley expressed his plans to return to retirement after a successful 36-year career.

An interim CEO will be announced shortly and will serve until a successor is appointed. Pending that announcement, the executive leadership team will report to Facundo L. Bacardi, the Company’s chairman, and a fifth-generation
member of the Bacardi family.

“Ed leaves Bacardi a stronger organization from his dedication to the Company and its brands,” said Mr. Bacardi. “We thank Ed for his commitment and passion to Bacardi and we all wish him well.”

During his tenure with Bacardi Limited, Mr. Shirley helped reignite the Company’s global marketing with new campaigns for Bacardi rum, Dewar’s Blended Scotch whisky, Grey Goose vodka and Martini vermouth and Italian sparkling wines. Also during his time with Bacardi, the Company acquired one of the hottest new brands in the industry with the addition of St-Germain elderflower liqueur to the Bacardi portfolio of premium spirits.