On Thursday, September 19th Bar Louie locations around the country will host their annual “Rock the Tot” tater tot eating contest. The contest will be broken into two parts, team relay races and a solo competition.

Each location will begin their relay race at 8 p.m., followed by the solo competition to crown their local “Rock the Tot” champion. The festivities will include a night of live entertainment and celebration as Bar Louie seeks to set the world record for most tater tots eaten simultaneously across all locations. Guests wanting to participate in the historic attempt will each receive one tater tot to eat at the designated time of 9 p.m. eastern daylight time.

The relay race teams will consist of four persons lined up with one pound of tater tots in front them. At the sound of the buzzer, the first team member will eat their pound of tots as fast as they can. The second team member will start their pound when the first team member has finished, and so on. The team to finish their four pounds of tots in the quickest time wins four “Rock the Tot” champions t-shirts and free tots for a year at Bar Louie. 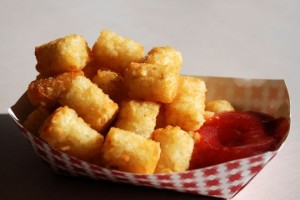 Solo competitors will face off in a challenge to eat as many tater tots possible in three minutes. Contestants are allowed to have any drink of their choice during that time. At the end of the three minutes a winner will be determined and declared the “Rock the Tot” champion. All winners will be declared locally, with BL Restaurant Operations verifying the results after the local competitions are completed. Local solo winners will receive a $250 Bar Louie gift card, champion trophy, t-shirt and free tater tots for one year.

The top five local winners will be awarded airfare and hotel accommodations to Cleveland, OH to attend the Rock & Roll Hall of Fame and compete at Bar Louie Cleveland on Saturday, October 5th for the ultimate title of “Rock the Tot” national champion. The grand prize winner will receive a $500 cash prize, free tater tots for life and hold the world record for most eaten tots in three minutes!