By Newsroom on June 27, 2017Comments Off on Burger King Opens New Airport Outlet in Fiji 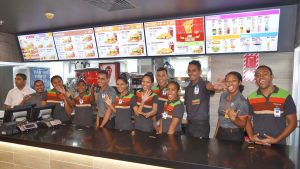 There is a lot of excitement surrounding the atmosphere at the Nadi International Airport as world‐renowned quick service restaurant Burger King is all set to open its third outlet in Fiji.

The new outlet which is earmarked for official opening on Wednesday, June 21 will be known as the “landside” restaurant and will be accessible to all customers who visit the airport.

Burger King initially started its Fiji operations at the Nadi International Airport on November 16, 2015 with the opening of its first outlet which is only accessible to customers departing our shores via the international departures lounge. Known as the “airside” restaurant, the first outlet has become very popular over the past 18‐months effectively making way for further expansion in the country.

“Following the success of our first outlet at the airport, we are now ready to extend our services to the general members of the public with a completely new restaurant,” Burger King general manager Akash Narsey said.

Mr Narsey said the new restaurant which will create close to 30 jobs will be a real game‐changer as far as service and taste profiles is concerned.

“While our menu and price structure at the new outlet will be exactly the same as our key restaurant in Martintar, the introduction of draught beer (on tap) will be yet another first for a quick service restaurant (QSR) in the country,” Mr Narsey added. 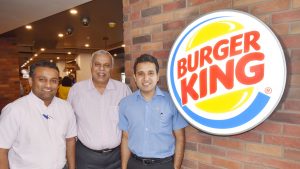 “It is service and innovation as such which sets BK apart from other QSR’s in the country and I am very optimistic that the new airport outlet will serve its purpose very well. The availability of lots of parking space in a secured area is also very encouraging as customers can have good time at Burger King without having to worry about parking at all.”

“The new “landside” outlet is part of the many restaurants planned for opening around the country with our first Suva outlet scheduled to be opened in the later part of this year,” Mr Patel said.

Meanwhile, just in 18‐months, Burger King has invested close to $12 million in the Fijian economy and has provided employment opportunities for 90 people with the number expected to grow as the international franchise opens more outlets across the country in coming months and years.