By Newsroom on January 29, 2013Comments Off on Chicken Wings Take Flight on Super Sunday 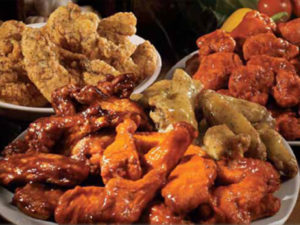 The Wing Experts at Wingstop are prepping for the biggest day of the year when they expect to sell more than 6 million wings at 550 locations across the country.

Wingstop expects Super Sunday business to be up 15 percent over last year, and if Wingstop reaches its goal this will be the 13th straight year the company has set a big game sales record.

“The Super Bowl is the second biggest eating holiday of the year, after Thanksgiving. With the growing demand for wings, we are gearing up for this to be our biggest year yet,” said Charlie Morrison, Wingstop president and CEO.

According to the National Restaurant Association, 48 million Americans get takeout for the game, and 63 percent list chicken wings as their “must-have” snack, surpassing pizza and topped only by dips or spreads.

Ninety percent of Wingstop guests order wings to go on Super Sunday, and once again Wingstop is encouraging fans to order in advance due to the overwhelming demand for their wings.

The chain is accepting online pre-orders for the big game now through Wednesday, January 30 at midnight.