By Newsroom on January 23, 2013Comments Off on Coyote Ugly Saloon Turns 20 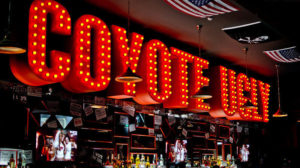 Coyote Ugly Saloon, one of the most famous bar on the planet, has turned 20 years old and is celebrating with, appropriately enough, a party, according to the chain’s founder, Liliana Lovell.

“Twenty years have flown by. I am so proud of that little bar. One little bar has spawned an internationally recognized brand. Have to thank my New York roots for twenty great years,” gushed Lovell as she reminisced about the early years of the Coyote Ugly Saloon.

The 20th year anniversary party begins with an invitation only private party on January 26 at the original Coyote Ugly Saloon located at 153 First Avenue in New York’s East Village. The party is open to the general public post 4pm.

The bartenders at Coyote Ugly serve a little bit of attitude with the drinks and are known for their dance routines on top of the bar. Lovell opened the first Coyote Ugly Saloon in New York’s East Village in 1993.

In 2000, the movie “Coyote Ugly,” which was based on the New York Coyote Ugly Saloon, was released and today there are 21 locations worldwide with more on the way.