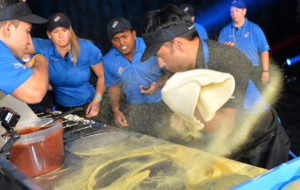 “I am elated that I have won the World’s Fastest Pizza Maker Competition,” said Grewal. “The competition gets stronger and stronger every year that we compete and I train hard to come out on top. I had no intention of letting the title go.”

The finalists represented Domino’s Pizza stores from around the world. They had to hand-stretch fresh dough, sauce and top three large pizzas – one pepperoni, one mushroom and one cheese – as quickly as possible. While speed was important, it was only part of the equation in determining the World’s Fastest Pizza Maker. Quality was scrutinized as four judges, highly qualified in Domino’s standard pizza–making practices, inspected the stretching of the dough, application of the sauce and portioning of toppings during the competition. If the pizza was not perfect, it was returned to the competitor who remade the entire pizza while still being timed.

Grewal has been with Domino’s for 22 years. He has been making pizzas since he was 13 years old. 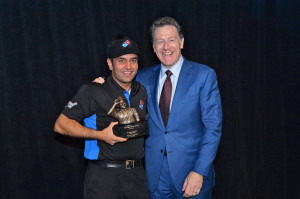 “We are extremely excited to crown Pali Grewal as Domino’s 2014 World’s Fastest Pizza Maker,” said Doyle. “Domino’s and its franchisees employ some of the greatest pizza makers in the world. Our emphasis is on the quality of the pizza, while also using our expertise to get them made quickly. We are known as the ‘delivery experts’ and our goal for everyone in our stores is to get hot, great–tasting pizzas to customers’ doors safely and efficiently. The World’s Fastest Pizza Maker competition recognizes the champions that take pizza–making to an entirely different level.”

The “World’s Fastest Pizza Maker” competition was held at Domino’s Worldwide Rally in Las Vegas and attended by more than 5,000 Domino’s team members and franchisees from around the world.