By Newsroom on August 26, 2016Comments Off on Domino’s Planning Drone Pizza Delivery Service in New Zealand

Domino’s Pizza is planning to become the world’s first company to offer a commercial drone delivery service after conducting a trial run in New Zealand.

The pizzamaker carried out a demonstration delivery by drone in Auckland on August 25, and afterwards said it aimed to launch a regular service in late 2016. 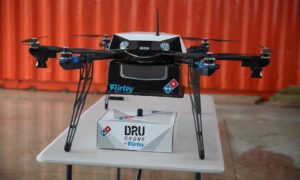 Amazon and Google are among companies looking to make deliveries by drone, and aviation authorities in the US, the UK, Australia and New Zealand have been relaxing rules for this purpose.

In 2015, New Zealand became one of the first countries to allow commercial drone deliveries. Speaking after the Domino’s test flight, the transport minister, Simon Bridges, said: “Our enabling laws and regulation means we have the ideal environment.”

But Philip Solaris, the director of drone company X-craft Enterprises, said Domino’s could be hampered by a rule requiring drones to be kept in sight at all times. 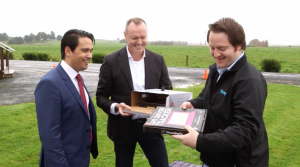 “I can’t truly see how commercially viable that idea is, because you would have to literally have somebody walking along to keep it in the line of sight, watching it at all times,” he said, adding that Domino’s would need to avoid “random hazards [such as] power lines, moving vehicles, children in the backyard playing”.

The Domino’s and 7-Eleven deliveries were carried out using drones from US-based company Flirtey.

Domino’s said it was looking into opportunities for drone delivery trials in Australia, Belgium, France, the Netherlands, Japan and Germany.

Drone deliveries will be legal in Australia in September, providing they stay at least 100ft (30 metres) away from houses.

In the US, drones will be permitted for deliveries from 29 August, but not across state lines or above members of the public.