By Newsroom on March 19, 2014Comments Off on Dunkin’ Donuts Asks Fans to Help Name a New Donut Inspired by Liverpool FC 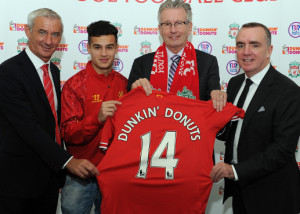 Dunkin’ Donuts, America’s all-day, everyday stop for coffee and baked goods, announced plans to introduce a special donut at select participating Dunkin’ Donuts restaurants in July to celebrate the brand’s partnership with Liverpool Football Club (LFC). For the honor of naming this new treat, Dunkin’ Donuts is kicking it over to its fans via social media. Dunkin’ Donuts this morning launched the “Name the LFC Donut” Twitter contest, with the goal of giving people a chance to offer their best and most creative name for the donut.  The person who scores the winning name will net a prize that includes a trip for two to Boston to see the pre-season match between LFC and AS Roma at Fenway Park on July 23.

Dunkin’ Donuts’ LFC-inspired donut is a jelly-filled yeast shell featuring a soccer ball design in white and red icing, representing the team’s iconic colors. The donut will be available in select participating Dunkin’ Donuts restaurants nationwide for a limited time in July. On March 19 and 20 fans can tweet their suggestion for the perfect name for this special donut using the hashtag #DDLFCDonut.

The person who offers the winning name, as selected by judges from both Dunkin’ Donuts and Liverpool Football Club, will win an all-expenses paid VIP trip for two to attend the pre-season match between LFC and AS Roma at Fenway Park in Boston on Wednesday, July 23. Twelve other participants will be selected to win a $100 mGift. The winning name will be announced at the end of March. 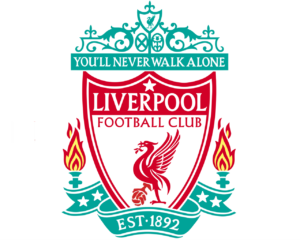 According to John Costello, President, Global Marketing and Innovation for Dunkin’ Brands, “Liverpool Football Club is one of the most storied and successful clubs in England, with a tremendous following all throughout the world. As soccer’s popularity in the U.S. continues to accelerate, we are excited to leverage our partnership with the LFC in fun, innovative ways to continue to grow our brand awareness and enhance customer loyalty. Giving people the chance to name our first donut inspired by Liverpool Football Club is a unique and exciting initiative, and just one of a number of ways we hope to engage with Dunkin’ Donuts guests and soccer fans throughout the country through this partnership in the coming years.”

Dunkin’ Brands currently has more than 18,000 points of distribution in nearly 60 countries worldwide, including nearly 11,000 Dunkin’ Donuts restaurants in 33 countries and 7,300 Baskin-Robbins shops in nearly 50 countries.

In 2013, Dunkin’ Brands opened 790 net new restaurants around the world, with 415 of these restaurants located outside the U.S. As a testament to its global fan base, Liverpool FC, an English Premier League football club, has over 200 Official Supporters Clubs all over the world in 62 different countries, including the UK, the USA, Spain, Germany, Brazil, China, Japan, Thailand, India, Malaysia, Australia and South Africa.