By Newsroom on February 1, 2013Comments Off on Edible Arrangements Celebrates Continued Strong Growth in 2012 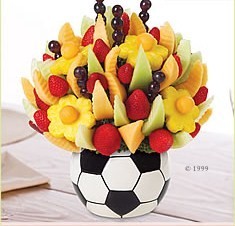 The opening of its 1000th location, a ground-breaking new advertising campaign, new franchise agreements representing 105 stores and expansion of the corporate headquarters were just a few of the reasons that Edible Arrangements International enjoyed 2012; one of its sweetest years ever.

The pioneer and leader in handcrafted fresh fruit arrangements opened 70 new locations, including the 1,000th store, located in Cranston, R.I., in 2012. In addition, Edible Arrangements has achieved system wide double-digit growth for five consecutive years, with 2012 system wide sales up 11 percent over 2011.

“We reached significant milestones this past year, thanks to the dedication of our franchisees, vendors and especially our corporate staff and store employees,” said Tariq Farid, co-founder and CEO of Edible Arrangements International. “It’s due to all of their hard work and enthusiasm that we continue to grow and plan to open 125 new locations in 2013.”

Edible Arrangements expanded its corporate footprint with the purchase of a commercial building adjacent to its Wallingford headquarters, adding 23,057 additional square-feet of office space. The company plans to connect the two properties and create a beautiful suburban campus-like environment.

“With 150 employees at our corporate headquarters, we were quickly outgrowing our corporate offices,” said Kamran Farid, co-founder and COO of Edible Arrangements International.

“We wanted to expand our property in Wallingford rather than uproot our staff and move to a new location. Purchasing this building was the best way to make that happen and we’re looking forward to future expansion and continuing to build our team.”