By Newsroom on December 4, 2012Comments Off on Edible Arrangements franchisee lands spot in high-profile ad campaign 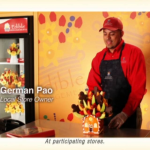 The spot is the latest in a series of “World of Edible Arrangements” commercials from renowned foodscape artist Carl Warner.

The new spot, which took 14 hours to shoot with a stop-motion camera, debuts today throughout the holiday season and features Miami-based franchise owner, German Pao, and the new Holiday House Bouquet™ arrangement.

Pao, who had never been on camera before, was in awe when he arrived on the Toronto set where Edible Arrangements® executives and crew members were shooting the commercials.

“It was amazing to me how much was involved in filming the spot,” said Pao. “There was so much equipment and so many people working all day to perfect this winter wonderland. Christmas is my favorite time of year so it was really fun for me to get to be part of this particular commercial.”

franchise four years ago near his hometown of Miami, in Pinecrest, Fla.

“I joined Edible Arrangements International in my mid-20s, but I was a fan of the concept even earlier,” he said. “I’d send my wife Edible Arrangements bouquets instead of flowers for our anniversaries because of how amazing the product looked and the ‘wow’ factor that came with the delivery. After a while I just thought, ‘why don’t I start doing this?’”

Two years into running the business, Pao received his engineering degree and now works for an engineering company while still running his store.

“I love both my jobs, and as an engineer I have a special appreciation for the expertise that goes into constructing hand-sculpted fresh fruit arrangements,” added Pao. “Appearing in the commercial and working as an Edible Arrangements® franchisee is a great experience. We’re already thinking about opening a second location.”

Pao’s “World of Edible Arrangements” spot is scheduled to air throughout December on national cable and select broadcast networks in the U.S. and Ontario and is available to view at http://www.ediblearrangements.ca/wintercommercial.aspx.