Famed French Chef Antoine Westermann Opens Restaurant in the US

By Newsroom on July 18, 2016Comments Off on Famed French Chef Antoine Westermann Opens Restaurant in the US 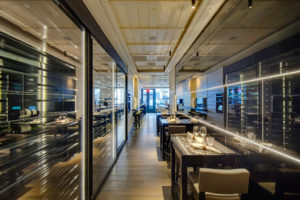 The first US location of the famous Parisian restaurant Le Coq Rico is now open at 30-32 East 20th Street, between Park Avenue South and Broadway in Manhattan.  The New York City architectural and design firm of Montroy Andersen DeMarco (MADGI) joined forces with Paris-based Pascal Desprez, a prominent international architect and the founder of studio DP Agence, to develop the design for the restaurant.

The restaurant is the brainchild of Michelin three–star chef and owner, Antoine Westermann, and his business partner, Alsatian culinary entrepreneur Francis Staub. Nicknamed “The Bistro of Beautiful Birds,” Le Coq Rico is a neighbour to some of New York’s most popular restaurants, which are located in the area at the convergence of the booming neighbourhoods of Flatiron/Madison Square, Union Square, Gramercy Park, and the Madison Avenue advertising district. It occupies the entire storefront in a landmarked Gabay Building, erected in 1910 and owned and managed by Walter & Samuels.  MADGI also designed the recent historic restoration of the building.

Westermann hopes that “bringing Le Coq Rico to New York will not only introduce a simplified and elegant way of dining, but also highlight the wonderful work of unsung independent American farmers.”  The Manhattan restaurant pays tribute to domestic American heritage poultry, raised locally and responsibly.  The original Le Coq Rico is located on Montmartre’s Rue Lepic in Paris.  Westermann also maintains other concepts in Paris, including Drouant par Antoine Westermann, Mon Viel Ami, and La Dégustation.  He was previously awarded three Michelin stars as the Chef and owner of Le Buerehiesel in Strasbourg.

The project team for the new Le Coq Rico brings together leading international heavyweights of the restaurant, hospitality, and architectural worlds. The original Le Coq Rico became famous for its gourmet poultry dishes, especially roasted chicken, which commands a cult-like following among both Parisians and tourists alike.  Le Coq Rico in Manhattan is Westermann’s first fully owned restaurant in the United States.  However, he has been active in the U.S. since 2002, having served as a chef and consultant to several American restaurants, including Café du Parc on Pennsylvania Avenue and Café 15 at the Sofitel Hotel, both in Washington, DC. 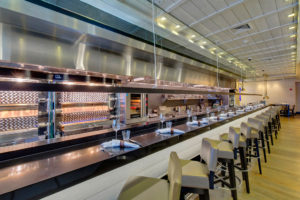 Westermann’s business partner and fellow Alsatian Francis Staub has developed a line of high-end cookware and bakeware under the Staub en France brand.

Pascal Desprez is celebrated as a prestigious international residential and hospitality architect.  He has designed villas in Santa Barbara, California; a chalet in Canada; and a private resort in the Seychelles.   His portfolio spans the globe, from Paris to Marrakesh, New York City, the Middle East, and the Far East.  Desprez’s restaurant and hospitality projects include the 86-suite, 30-riyadh Naoura Barrière hotel and the 50-acre Mandarin Oriental resort in Marrakesh, Morocco; the 325-machine and five-restaurant/bar Casino Barrière de Toulouse; the 349-room Hotel Majestic Barrière in Cannes; the 38,000-sq.-ft. Le Spark spa in Enghien-les-Bains; and the 125-machine Les Princes Casino in Cannes.

The 132-seat, U-shaped restaurant features a full bar; a wine cave, which is an area with an illuminated wall that serves as a wine chiller; a dining area with lacquer-top tables and seating as well as two communal tables; and a very high-end show kitchen with bar-style seating for 18.

Overall, the design is meant to pay homage to the original Le Coq Rico in Paris, but is much more refined.  Thus, it has wide-plank oak flooring throughout, walls and ceilings –reminiscent of a farmhouse – are sandblasted and white-painted Canadian oak, with black mirror-like accents made of black back-painted backlit glass on walls.

The interior also houses a feature wall across from the kitchen made of Moonface marble.  The 16′ feature wall is illuminated with an LED wall wash.  When the maître d’ takes patrons from the front, each gets a glimpse of the entire restaurant, as they must walk through the restaurant’s individual sections, i.e., the wine cave, then the dining room with its wall unit of dishes and communal tables, and then the show kitchen. 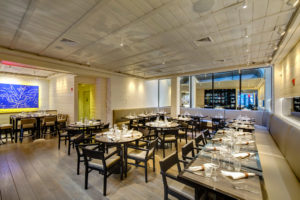 The project team installed a new angled 21’x5′ skylight which features prominently in the dining room.  Energy-efficient LED lighting is used throughout, backlighting the black back-painted glass and with down lights over the dining tables.  Continuous linear LED fixtures illuminate the show kitchen’s dining counter.  The cellar has storage and a wine room.

The 670-square foot kitchen is meant to be as much a theatre as it is a functional kitchen.  It is appointed with Bonnet custom ovens manufactured in France and each shipped in two pieces.  Two rotisserie ovens by Rotisol are also featured (Rotisserie MF 1375.6OLG), with each able to roast up to 36 chickens at a time.  They are equipped with glass doors that allow customers observe the poultry roasting on rotating spits.

Overall, the kitchen line is 33.5′ long, with 24.5′ of the Bonnet matte black ovens and two 4.5′ long Rotisols, also in black. The eating bar flanking the kitchen has bar-height seats and offers a front-row centre look in on the show in the kitchen.  There are interactions between the cooks and the patrons sitting in this section, with offers of small plates of what they are cooking.  The bar top is stone and the bottom is wood and stone.

The sleek, modern, L-shaped wet bar (20′ long on one side, 6′ long on the other) is made of oak and has a black top.  The base of the bar is white wood at the top with dark stone at the base, specifically Quartzmaster’s Pure Black.  It seats 10.  The bar area also features a mirror along one wall and a black, back-painted glass wall along the other.  Shelves are illuminated to showcase the liquor bottles.

According to MADGI project manager Mark Vella, the most challenging part of the project was the seating.  “Fitting 132 seats in a fairly small, unusually shaped restaurant, given how much space the kitchen had to take, took creativity,” he said.   “Also, fitting in the lighting and mechanical equipment in a shallow ceiling required much careful coordination among the trades,” he continued.

The interior features a selection of new works by the celebrated American visual artist Doug Fitch, including a large, backlit painting of a stylised rooster.

To create the kitchen, MADGI specified opening up the back wall.  Structural engineer Eric Crowley put in a steel beam to reinforce the area.  Other partners were mechanical/electrical/plumbing engineer 2LS Consulting Engineering, and Premium Supply was the kitchen consultant. 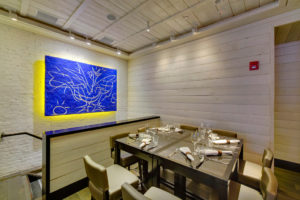 While consulting at Café du Parc in Washington, D.C. several years ago, Westermann was introduced to a new generation of small local farmers and the culinary opportunities of the American terroir.

Westermann believes that, with the right support and consumer demand, the United States has the potential to become akin to the Rhine or Loire valleys in France that he grew up in.  Westermann spent more than a year traveling across the Hudson Valley and Pennsylvania to get to know small-scale farmers, present his philosophy, and assure them that an expansion of their heritage poultry production to a large scale could be supported by the demands of a New York City bistro such as Le Coq Rico.

“Fowl is a world unto itself,” noted Westermann, “its flavour and texture changing depending on the region, style of farming used, and age of the bird.”

The menu includes traditional dishes rooted in classical technique, such as Chicken Baeckeoffe inspired by the Alsatian preparation of slow roasting in a casserole dish sealed with dough.  An entire section of the menu is dedicated to eggs, with preparations including Soft‐boiled Egg with Salmon Roe and Algae Butter Finger Bread and Eggs Mimosa with Tuna Filets.

Two types of Westermann’s celebrated terrines are available, and traditionally underutilized cuts of poultry such as liver and hearts can be found in a Giblets Platter, salads, and in their own dishes such as Roasted Duck Liver with Rosemary and Pan-Fried Cherries.

Famed French Chef Antoine Westermann Opens Restaurant in the US added by Newsroom on July 18, 2016
View all posts by Newsroom →