By Newsroom on April 2, 2013Comments Off on Giant Asparagus Spear Will Tower Over The Shard 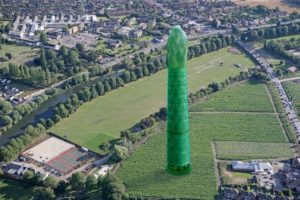 Building will begin this month on a 320m Asparagus Spear which will be unveiled in Evesham in 2018 to celebrate the fact Worcestershire is now the world’s No 1 producer of asparagus.

On completion, The Spear will be the tallest building in the UK and it is hoped it will also become a major new tourist attraction for the country.

As well as attracting tourists, The Spear will provide an important resource for Worcestershire. It will comprise a total of 80 floors offering extensive office and retail space in addition to much-needed housing. There will also be a theme park dedicated to the Vale of Evesham’s fruit and vegetable heritage.

Within the tip of The Spear, a visitor attraction is planned including an Asparagus Museum and ten viewing platforms enabling visitors to see up to 75 miles – a total of 10 counties – on a clear day.

The Spear is being built by Crown Meadow in Evesham and will be situated right next to the river and within a huge asparagus field.  We think it’s important to honour a vegetable which is at the heart of Worcestershire’s horticultural success and is so traditionally British. The asparagus season lasts just two months, beginning on 23rd April which is, of course, Saint George’s Day. Soon we shall have a year-round reminder of asparagus thanks to The Spear.

Giant Asparagus Spear Will Tower Over The Shard added by Newsroom on April 2, 2013
View all posts by Newsroom →