By Newsroom on May 10, 2013Comments Off on International Spirits Introduces Dutch Apple & Cherry Vodka 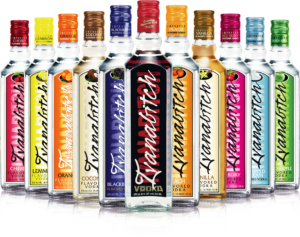 Ivanabitch Vodka has built its reputation for delivering a top-shelf quality product at a value price point.

The company sold approximately 300,000 cases of spirits in 2012. The award-winning spirits are available in nearly 7,000 locations in 23 states.

The two new flavors, imported from the Netherlands, are made using Ivanabitch’s gold medal-winning vodka. The premium, imported vodka is distilled five times and filtered over active charcoal; then natural flavoring is added.

“Flavored vodkas are a growing trend, because they appeal to a broader demographic of consumers,” said Tony Elward, president and CEO of International Spirits.

“In fact, more women are switching to cocktails with flavored vodkas as their drink of choice.”

“Dutch Apple and Cherry are natural compliments to our eight existing vodka flavors,” Elward added. “We plan to introduce four more flavors in 2013.”

As International Spirits introduces new products, they are submitted for review to the Beverage Testing Institute, an independent corporation that conducts professional, blind tastings and review of beverage products. All products submitted have received medals.