By Newsroom on June 26, 2013Comments Off on Jared The Subway Guy To Star In New Webisode Series: Jared’s Journey

In celebration of Jared Fogle’s 15th Anniversary of losing and keeping off more than 200 lbs., Jared will embark upon a new mission: to inspire America with a health-focused webisode series aimed at motivating and inspiring fans around the world.

The first episode of the program, entitled Jared’s Journey, features a one-on-one interview with celebrity host Mario Lopez in which Jared and Mario discuss his approach to career, family, lifestyle and health.

During each episode, Jared will share the stories of a well-known personality and his or her individual path to a healthy and balanced lifestyle.

There will be six webisodes in all, which will air starting in June and throughout the remainder of 2013.  Each is designed to inspire fans, the same way Jared has inspired millions over the last 15 years since achieving his 200 pound weight loss by eating from the Subway Fresh Fit Menu. 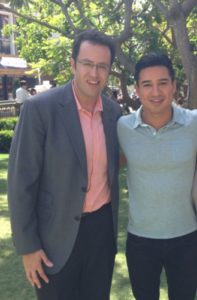 Subsequent guests will include Erin Andrews, sportscaster and television personality, and Lone Ranger star Armie Hammer, who will also sit down one-on-one with Jared to discuss his upcoming summer blockbuster.

“For 15 years, I have been the interviewee,” said Fogle.  “This time I’m turning the microphone and camera around to learn from other inspirational men and women who have made health and wellness a priority in their lives.  I know we’re going to reach a lot of folks – and we just might help them on their path to their own healthy lifestyle.”

Fifteen years ago in 1999, Jared was discovered as the Indiana University student who had lost more than 200 pounds eating Subway sandwiches. Since then, Jared has joined other Famous Fans in starring in more than 300 commercials.

He has also met U.S. Presidents, ran marathons, visited U.S. troops and inspired many through his work with partnerships with the American Heart Association and his own non-profit organization dedicated to the fight against childhood obesity.

Jared The Subway Guy To Star In New Webisode Series: Jared’s Journey added by Newsroom on June 26, 2013
View all posts by Newsroom →