By Newsroom on September 7, 2017Comments Off on KFC’s New Colonel Ray Liotta Finds Himself Torn Between Two Signature Flavours

In keeping with the brand’s rotating cast of unexpected celebrities portraying iconic founder Colonel Harland Sanders, Kentucky Fried Chicken (KFC) announced the brand has tapped actor Ray Liotta, known for his iconic role in “Goodfellas” and currently the star of NBC’s “Shades of Blue,” as its new Colonel. 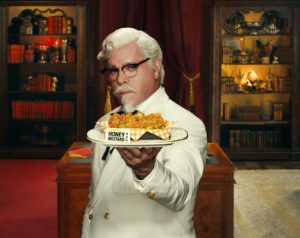 Liotta was selected for the role for his celebrated ability to play multi-faceted characters.

“When they asked me to take on twice the role of any Colonel before me, I thought ‘man, this is really going to be interesting and will be a role I haven’t been able to take on before,'” said Ray Liotta. “But as I got into character and put on that infamous Colonel moustache I really was able to have fun with it and enjoy playing the person that is seen in commercials and billboards across the nation.”

Georgia Gold honey mustard BBQ and Nashville Hot are the first of KFC’s authentic regional flavors the brand is exclusively bringing to restaurants across the country.

Unlike the newest Colonel, KFC fans don’t have to pick a favourite flavour. Bragging rights for America’s favourite flavour are up for grabs, as both Georgia Gold and Nashville Hot are available in Extra Crispy Tenders, Chicken Littles and Extra Crispy Chicken at KFC restaurants across the country.