By Newsroom on January 24, 2013Comments Off on Lateral Aspect Test The Willpower For Lamb 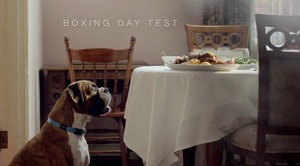 Perth creative agency Lateral Aspect, have come up with an unique way to market meat, with their latest ad for lamb brand Valley Spring.

“Last summer we created a press ad for Valley Spring Lamb that was made specifically to coincide with the Boxing Day Test, which in Australia is a big day that many families have a lamb lunch and watch the cricket. The response at retail level was huge and led to the development of the TVC, which was funded in part by Australian Meat & Livestock,” explained Lateral Aspect creative director Mark Lucas.

‘Boxing Day Test‘ is a humorous look at the test of willpower between a beautiful lamb roast and a young, hungry Boxer dog. The ad follows Lateral’s last red meat spot ‘Rump‘, which was a finalist at the FAB International Creative Excellence Awards in 2010.

“Our biggest creative challenge was to launch with a  concept that matched the launch of DBC’s Evertender Beef in 2010. The TVC ‘Rump’ that under-pinnned the launch which was recognized internationally and sales and recognition of the product was fantastic,” said Lucas.

“Our biggest commercial challenge was that in 2013 the retail environment is much more challenging so we wanted a spot that resonated with the Aussie summer and represented the product for what it is, which is the best lamb in the country and a creative concept that wouldn’t date in a hurry.  The entire crew on this job (including Jordy, the dog!) were top shelf and we are really happy with the outcome.”

Valley Spring is a product of Dardanup Butchering Company based in Western Australia, who have been a client of Lateral Aspect for 15 years.

Lateral Aspect Test The Willpower For Lamb added by Newsroom on January 24, 2013
View all posts by Newsroom →