By Newsroom on September 20, 2013Comments Off on Martini Celebrates 150 Years of Italian Style at Glittering Anniversary Gala 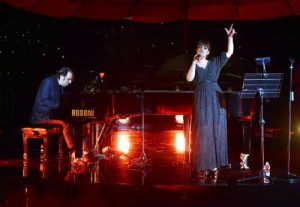 Martini, the leading Italian sparkling wine, celebrated its 150th Anniversary in spectacular fashion on the shores of Lake Como.

The gala to celebrate 150 years of Martini, the ultimate symbol of Italian style and passion, was filled with magical Martini moments from the past, the present and the future all set against the stunning backdrop of the Italian lakes.

International recording artist Lily Allen, Grammy-nominated pianist Chilly Gonzales, DJ and producer Mark Ronson and supermodel and actress Rosie Huntington-Whiteley were among the guests at the exclusive celebration held in the palatial Villa Erba. As they enjoyed Martini sparkling wines and a collection of incredible cocktails made with Martini vermouth, the 600 guests explored the exciting world of Martini and in the future including the trend-setting Martini style of motor sports, cinema, fashion and art. 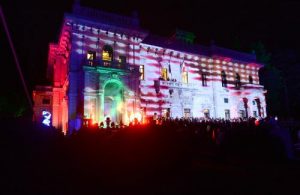 Cocktails at the gala were created by some of the world’s top bartenders and included classics first made with Martini including the Negroni and the Manhattan and another in the making, the Martini Royale — a refreshing cocktail made with equal parts Martini Prosecco and Martini Bianco or Rosato, served over ice with a squeeze of lime and a sprig of mint.

For 150 years, the extraordinary taste of Martini vermouth and Martini sparkling wines has been created using the finest ingredients by true master craftsmen. In its 150th year, it’s these experts in taste who are upholding the same exceptional quality standards first set in 1863 by Luigi Rossi, the original creative herbalist and liqueur expert for Martini. It was Luigi who, together with two other visionaries Alessandro Martini, a gifted salesman, and accountant Teofilo Sola, established Martini 150 years ago. 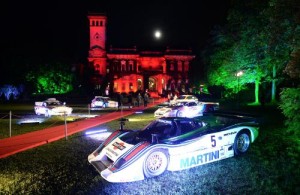 A fleet of stunning Martini Racing cars greeted guests as they arrived on the red carpet. Martini has enjoyed a long-standing relationship with motor sports and has always embodied the same courage, creativity and spirit of endeavour found in motor racing. The classic automobiles, valued at more than €6 million (US$8 million), herald a new era of Martini Racing which was announced this year as part of the 150th Anniversary celebrations.

Performing from a floating stage on Lake Como, the night’s very special musical performances included a unique collaboration between Lily Allen and Chilly Gonzales. Mark Ronson filled the dance floor with a specially created set. And with a nod to the ongoing relationship Martini enjoys with cinema, the renowned Orchestra Italiana Del Cinema entertained guests with a selection of Fellini film scores.

“It was an honor to be part of the Martini 150 anniversary event tonight,” said Lily Allen. “The villa was gorgeous, the crowd was fun, the Martini Royales were flowing, and I loved performing with Chilly. Happy birthday Martini!” 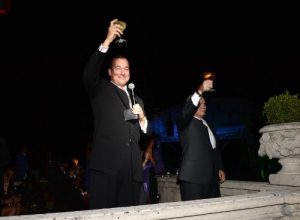 Distinguished guests in attendance included Facundo L. Bacardi, Chairman of Bacardi Limited and the great-great grandson of Bacardi founder Don Facundo Bacardí Massó, and Ed Shirley, President and CEO of Bacardi Limited. The company acquired the Martini & Rossi Group in 1993. Mr. Bacardi led the guests in a toast to 150 incredible years and to the future success of Martini.

“We are excited to be here to celebrate the 150th Anniversary of Martini a brand which is synonymous with Italian style. I feel honored to be a part of the continuing success of Martini,” said Mr. Bacardi. “This incredible celebration reflects the Martini of today and gives a taste of its future. The world of Martini is as exciting today as when consumers first fell in love with the passion, charm and attitude of this Italian icon. We are looking forward to a future filled with Martini style and passion.”

Martini Celebrates 150 Years of Italian Style at Glittering Anniversary Gala added by Newsroom on September 20, 2013
View all posts by Newsroom →