By Newsroom on August 22, 2013Comments Off on Moët & Chandon Marks 270th Anniversary in New York

Moët & Chandon, the champagne of success and glamour since 1743, celebrated its momentous 270th anniversary with a stylish celebration in New York City.

270 Years Has Never Been so Stylish

The “Tribute to Success & Glamour since 1743” unveiled the House’s modern new advertising campaign with Roger Federer, as shot by Patrick Demarchelier.

Federer was announced as the House’s brand ambassador in November 2012, and is the contemporary face of Moët & Chandon’s longstanding history of success and glamour. The new campaign embodies the values of boldness, elegance and generosity that have guided the House throughout its 270-year history.

“We couldn’t be more pleased to be in New York City to mark Moët & Chandon’s 270th anniversary, and to celebrate alongside our brand ambassador Roger Federer, with whom we introduce this stunning new campaign,” said Stéphane Baschiera, President and CEO of Moët & Chandon.

“Over the course of 270 years, the very words ‘Moët & Chandon’ have become synonymous with the most venerable of traditions, the most modern of pleasures, and the most generous range of champagnes for all occasions. Tonight we raise a glass to those who have contributed to this formidable heritage throughout the centuries.”

The anniversary celebration featured an exclusive music showcase by Emeli Sandé, as well as music by DJ guest Bob Sinclar. The stunning “Centuries of Success & Glamour Cake by Moët & Chandon”, designed by the event’s official caterers Potel & Chabot, was a towering marvel featuring a replica of the Statue of Liberty.

Flanked by cake layers with miniature bottles of Moët Impérial champagne, the cake created a mesmerizing pyramid effect reminiscent of the House’s own grand gesture of a champagne pyramid.

At 270 Years, Success is a Matter of Style 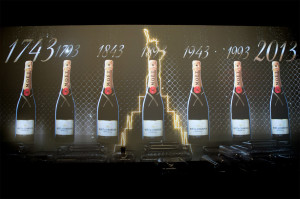 Over its 270 years, Moët & Chandon has helped turn champagne into the international icon of luxury and celebration that it is today.

Established in 1743 by the successful wine merchant Claude Moët, the House was founded upon the pursuit of excellence, and born from a family legacy of boldness, elegance and generosity.

Today Moët & Chandon shares the magic of champagne with the world, and carries out this mission from the red carpet of international cinema, to the winners’ podium of sports competition, to stylish celebrations around the globe.

A Nod to a Love Affair With New York City 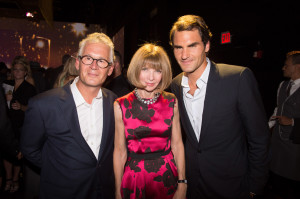 Moët & Chandon and New York City go together like champagne and celebration, and the city has hosted some of the House’s most memorable celebrations.

In 1929, the House honored aviators Dieudonné Costes and Maurice Bellonte who made the first Paris-New York non-stop aviation crossing.

In 1993, the worldwide voyage of Moët & Chandon’s hot-air balloon the Spirit of 1743 included a memorable stop at the Statue of Liberty.

In 2006, the House illuminated the Statue of Liberty – New York’s iconic landmark and a symbol of friendship between France and the US – for the statue’s 120th anniversary.