By Newsroom on October 2, 2012Comments Off on Mountain Dew And DORITOS Brands Bring Double XP Back, Bigger Than Ever With Halo 4

PepsiCo’s Mountain Dew and DORITOS brands know that gamers across the country have been waiting for one thing this fall: the long-anticipated launch of Halo 4. Today, ending weeks of speculation, DEW® and DORITOS brands have confirmed that Double XP is back and bigger than ever to give fans the opportunity to experience the next installment of the epic gaming saga like never before when it hits shelves on November 6.
Starting today, hardcore players looking to show off their skills next month can get a head start by opening an account at DEWXP.com or DORITOSXP.com where they’ll be able to unlock and load future XP matches that can be redeemed to amplify the multi-player experience, accelerate Halo 4 specializations, and reveal ultra-new gear and weapons. In addition to being able to customize armor permutations, for the first time in Halo history, players will be able to preselect their arsenal before entering the gaming landscape and customize their armor because for Halo fans, it’s not just about scoring the gear in the game, but creating the gear you want.

“Halo fans have an unrivaled passion, especially when it comes to multiplayer competition,” said Bonnie Ross, General Manager, 343 Industries. “We’re excited to work with Mountain Dew and DORITOS to reward that enthusiasm with the biggest Double XP program ever.”

“The gaming community is expecting a lot from HALO 4, and the involvement of the Mountain Dew and DORITOS brands adds another layer of excitement,” said video game expert, Geoff Keighley. “Double XP will amplify the multi-player experience and prepare fans for their Spartan-IV career online.”
Fans aren’t just rejoicing the return of Double XP. Introduced in 2007, in conjunction with the launch of Halo 3, tried-and-true gamer favorite Mountain Dew Game Fuel – DEW with a blast of citrus cherry flavor – will hit shelves later this month and will be available for a limited time, giving players across the country plenty of time to stock their fridges in time for November. 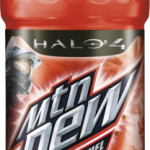 Mountain Dew And DORITOS Brands Bring Double XP Back, Bigger Than Ever With Halo 4 added by Newsroom on October 2, 2012
View all posts by Newsroom →