By Newsroom on July 29, 2015Comments Off on Mountain Dew & Doritos Team with Call of Duty for Double XP in Zombies 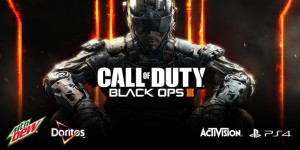 Mountain Dew and Doritos, the ultimate fuel for gamers, are once again teaming up with Activision Publishing for the latest installment in Call of Duty, Black Ops III, which hits shelves worldwide on November 6. For the first time, the ‘Fuel Up for Battle’ program will offer fans exclusive Double XP in the highly-anticipated Call of Duty: Black Ops III Zombies mode, ‘Shadows of Evil.’

The Zombies mode in Black Ops III features its own XP progression system for fans – a first for the Call of Duty franchise – adding greater depth and more re-playability to the Zombies gameplay that players have come to expect. Starting in early October, fans in the U.S. can collect codes from specially marked packages of DEW and Doritos products to redeem points and earn up to 30 minutes of exclusive Zombies Double XP per day as well as the chance to win other great prizes.

“DEW and Doritos are excited to take the ‘Fuel Up for Battle’ program to a new level by giving gamers for the first time Double XP in Zombies mode,” said Greg Lyons, vice president of marketing, Mountain Dew. “Gaming is in our brand’s DNA, and partnering with Doritos to bring one-of-a kind gaming promotions and exclusive opportunities to our fans is something we are very proud of.”

“The DEW and Doritos ‘Fuel Up for Battle’ promotion is another example of PepsiCo’s strength in building integrated food and beverage marketing campaigns,” said Jeff Klein, vice president of marketing, Frito-Lay. “We are delighted to engage consumers with exclusive experiences through our unmatched brands in combination with blockbuster video games.”

Mountain Dew is bringing back tried and true gamer-favorite – Mtn Dew Game Fuel Citrus Cherry – and a new flavour – Mtn Dew Game Fuel Berry Lime – for a limited time only. Both products will hit shelves in the U.S., starting October 5 and will also be available via online retailers all year long.

Following the launch on October 5, fans can visit here for complete details and rules of the ‘Fuel Up For Battle’ program.

Mountain Dew & Doritos Team with Call of Duty for Double XP in Zombies added by Newsroom on July 29, 2015
View all posts by Newsroom →