By Newsroom on January 25, 2013Comments Off on Nestlé Steps Up It’s Fight Against US Obesity 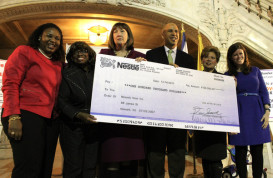 A little over a week after Coca-Cola announced their plan to tackle obesity, another corporate heavy weight has now joined the fight.

‘Nestlé/Newark Now!’, which was launched in 2012 with Newark’s Mayor Cory A. Booker, aims to reach twice as many families in year two. Some of the mothers and other women who went through the first programme will become ‘peer educators’.

In Newark, nearly one third of children aged 3-5 years old are classified as obese – three times the US national average. ‘Nestlé/Newark Now!’ has been designed to try to address this.

The programme, run by Nestlé and the community organisation Newark Now!, helps fill a ‘gap’ in nutrition education that occurs after the first year of post-natal doctor visits and before the child reaches school age.

A bilingual public health nutritionist leads the sessions in community centres around Newark.

Fifty-five families took part in the first year, learning about the importance of breastfeeding, how to increase fruit and vegetable consumption, healthy snacking, dealing with fussy eaters, portion control and physical activity.

An advisory board made up of local nutrition and public health experts, as well as community members with experience in engaging with local residents to help manage programme content and activities created the curriculum.

Starting in March, parents and other women who were picked to become ‘peer educators,’ will begin sharing their knowledge with hundreds more families.

The ‘Nestlé/Newark Now!’ curriculum draws on the findings of the Nestlé Feeding Infants & Toddlers Study (FITS).

FITS studied the dietary habits and nutrient intake of 3,200 infants, toddlers and pre-schoolers, making it one of the largest, most comprehensive studies of its kind in the United States.

The study found that children aged as young as 12-24 months old were beginning to develop unhealthy dietary patterns that may lead to childhood obesity.

The study also revealed fruit and vegetables were lacking in children’s diets.

At an official ceremony in the city to mark the next phase of the programme, Sylvana Linetti, Nutrition Director for Nestlé/Newark Now and Marilyn Knox, CEO of Nestlé Infant Nutrition, joined Newark Mayor Booker and Deputy Mayor Margarita Muniz.

Nestlé Steps Up It’s Fight Against US Obesity added by Newsroom on January 25, 2013
View all posts by Newsroom →