By Newsroom on August 27, 2015Comments Off on Pizza Hut is Official Pizza Sponsor of ESPN Fantasy Football 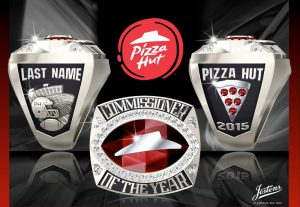 Even before the first game, American football fans across the US get together to draft their ultimate fantasy football teams. In fact, fantasy football participation has grown 40 percent in the past year alone. And just in time for kickoff, Pizza Hut has signed on as the official pizza sponsor of ESPN Fantasy Football, helping players gear up for the start of the season with special offers and opportunities to win prizes all season long, culminating in the chance to win a ring with an estimated value of $10,000.

Each week, Pizza Hut will recognize one deserving commissioner with the Pizza Hut Commissioner of the Week Award, which includes a commemorative football, free Pizza Hut pizza for the remainder of the fantasy football season, a $200 ESPN shop gift card, $30 Pizza Hut gift cards for each member of the commissioner’s league, a one-year ESPN Insider subscription and one other unique weekly prize, which could include a custom bobblehead resembling the winner on the set of Mike & Mike, a strategy session with Matthew Berry, a feature on the Fantasy Football Now podcast and more.

At the end of the season, Pizza Hut will name the Fantasy Football “Commissioner of the Year,” who, along with bragging rights, will receive a custom ruby and diamond-encrusted ring valued at $10,000, made by renowned championship ring creator Jostens. Plus, the winner will receive the ultimate Pizza Hut and ESPN football party, which includes a trip for two to ESPN headquarters in Bristol, Conn., a tour of the ESPN studios, a meet and greet with ESPN talent, two year’s worth of Pizza Hut pizza, a $2,500 Amazon gift card, a custom 3D printed bronze bust and more.

“The passion around fantasy football continues to grow each year and by working with ESPN, we’re able to be a part of each and every exciting fantasy football moment this season, from draft parties through playoffs,” said Jared Drinkwater, vice president of marketing, Pizza Hut. “Each year millions of friends sign up to compete against one another in fantasy football. While league champions are often honored at the end of the season, we wanted to reward the fantasy football commissioners who spend countless hours managing their leagues and making sure their friends, families and colleagues have fun.”

For all fantasy football fans, Pizza Hut is offering a “Fantasy Football Draft Day Deal” that includes two large one-topping pizzas, 8 bone-out wings, an order of breadsticks and any two liter of soda for $24.99.

Pizza Hut is Official Pizza Sponsor of ESPN Fantasy Football added by Newsroom on August 27, 2015
View all posts by Newsroom →