By Newsroom on November 14, 2017Comments Off on Pyramid Brewing Co. Brews an IPA for the Portland Trailblazers 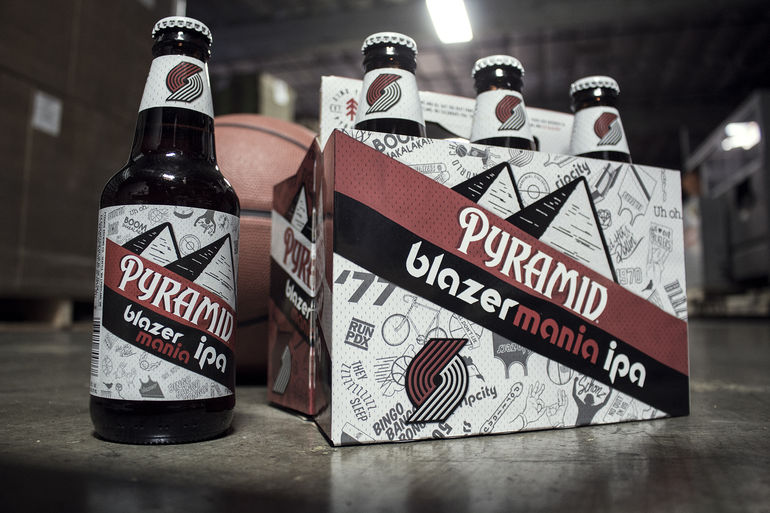 As the Portland Trail Blazers and their fans embrace the start of the regular NBA season, Pyramid Brewing Co. developed the perfect beer to share with fans for the upcoming season.

Pyramid announced the release of Blazermania IPA, the brewery’s newest beer that delivers a fan worthy IPA for the NBA’s most loyal fans in Oregon and the Pacific Northwest.

Blazermania IPA contains a clean and crisp malt body that serves as the perfect platform for the beer’s citrusy hop flavours and aromas. The packaging showcases 45 years of Trail Blazer spirit, bringing together fans from every generation with the use of iconic symbols throughout the design. Displaying home and away colours adds that extra value of support so fans can cheer on their team at home or on the road.

“It is an exciting time to be a Blazer fan this season,” said Head Brewer Ryan Pappe. “Brewed with Nugget, Centennial and Amarillo hops and dry-hopped with Centennial and Calypso, Blazermania is a refreshing and amazingly drinkable IPA. With Blazermania, fans will be set from tip off all the way through double over time!”

After three decades of brewing some of the Pacific Northwest’s favourite ales and lagers, Pyramid is integral to the lifestyle here and it is a significant piece of many people’s favourite memories, celebrations and experiences. Pyramid encourages Portlanders to enjoy their passions with craft brews and savour those moments with fantastic beers worth sharing. Whether you’re a fan from the Walton, Drexler, Roy, or Lillard era, there’s a unique and passionate bond with the Trail Blazers and their fans.

Blazermania IPA is available now in 12 oz. 6-pack bottles and 22 oz. bottles, as well as on draft at Moda Center and select bars in the Portland Metro area.

Pyramid Brewing Co. Brews an IPA for the Portland Trailblazers added by Newsroom on November 14, 2017
View all posts by Newsroom →