Heinz Big Flavours – You Decide is giving consumers the chance to take control of the recipe book by voting for one of three new big, chunky and tasty flavours – Fiery Chicken & Chorizo, Roast Ham & Pea and BBQ Chicken & Veg – to join the Big Soup family.

Kevin Sinfield (Leeds Rhinos), Sam Tomkins (Wigan Warriors) and Eorl Crabtree (Huddersfield Giants) kicked off the campaign in Leeds by lending a hand in the pop-up City Square ‘kitchen’ and becoming Heinz Big Chefs for the day – surprising commuters with samples of the three trial flavours. 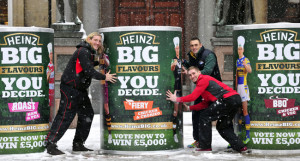 “It’s great that we’re able to get the consumers involved in choosing our next Full on Flavour Heinz Big Soup to join the range – we feel it’s really important to listen to the public and those who choose Big Soup – so this is truly giving them the opportunity to voice their opinion. I’m delighted to have Kevin, Sam, Eorl and Gareth Ellis on board with Heinz Big Flavours – You Decide – four seriously big and respected names in Super League, and I hope that as many fans as possible can make it to one of our Heinz Big Tours to meet them.”

Kevin Sinfield, Leeds Rhinos and England Captain said, “It has been great to meet so many passionate Rugby League fans and introduce them to the new range of Heinz Big flavours; having people choose their favourite flavour is a really good idea and I will definitely be voting.”

Fans of Heinz Big Soup can vote for their favourite new flavour at www.heinzbig.co.uk, where they will automatically be placed into a prize draw to win £5,000, Super League tickets, and signed merchandise from the Heinz Big Flavours ambassadors.

The England Internationals will each make an appearance at one of the Heinz Big Tour events in Leeds, Manchester and Hull during February and March.

The Heinz Big Tour will give people the chance to exclusively sample the three trial flavours and vote on the spot, as well as taking on the Heinz BIG Flavours ambassadors in the Heinz Big Challenge game.

The ‘Heinz Big Flavours – You Decide’ competition runs until 12th April 2013. Heinz plans to launch the winning flavour in autumn, ready for warming up both Super League and Big Soup fans this winter.