By Newsroom on May 30, 2017Comments Off on Somerdale Launches New ‘Westminster Sharp’, a Fully Accredited, Non-GMO British Cheddar 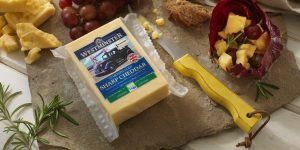 Somerdale International, the leading exporter of British cheeses and dairy products, has launched a fully accredited, non-GMO (genetically modified organism) British Cheddar. The new ‘Westminster Sharp’ Cheddar has been specially developed by Somerdale in partnership with Joseph Heler, the award-winning British cheesemaker located in the heart of England’s Cheshire countryside, in response to growing consumer demand for non-GMO foods especially in the United States.

‘Westminster Sharp’ is an aged Cheddar cheese matured for at least 12 months which delivers a mouth-watering, strong and full flavour on the palate. The new ‘Sharp’ will be showcased on the Somerdale International stand at June’s International Dairy-Deli-Bakery Association Seminar & Expo (IDDBA). The event being held in Anaheim, California (4-6 June) is the largest show in the world serving the Dairy, Deli and Bakery categories and expects to attract over 9,000 trade visitors and 1,900 exhibitor booths. U.S. retail stockists already confirmed include: Shaws; Safeway; Albertsons; and Earthfare.

The new ‘Westminster Sharp’ has been fully accredited as non-GMO by NSF International, the international food certification organisation, under the rigorous testing regime and consensus-based standards of the ‘Non-GMO Project’. The certification covers a comprehensive range of checks including ensuring that the cheeses are made with milk from dairy herds not fed with feed containing GMO and similarly that the rennet used in the cheese making process is also verified as non-GMO. Local Cheshire dairy farmers that supply milk to Joseph Heler for ‘Westminster Sharp’ will receive an additional milk price premium linked to the amount of cheese sold in recognition of their commitment to producing non–GMO milk.

Alan Jenkins, Director at Somerdale International commented “Across the world and particularly in the United States we are seeing increased interest and concern amongst consumers about what the food they eat contains and how it is produced. In line with this, there is a growing demand for non-GMO products and Westminster our new independently accredited great tasting aged British Cheddar responds to this by providing a credible non-GMO choice.

“Our launch of a non-GMO Cheddar follows on from the success of our non-GMO Cromwell Double Gloucester with Chives & Onions launched in July 2016. Both are good examples of how Somerdale is committed to developing products that add value and are tailored to meet the requirements of a diverse range of international market places. We firmly believe that our ability to offer to our US customers and their consumers non-GMO cheese will reinforce further our position as the leading exporter of British cheeses to the States.”