By Newsroom on April 29, 2013Comments Off on Sparkling ICE Named To IRI New Product Pacesetters Report

Sparkling ICE, part of the TalkingRain portfolio of beverages, has been named one of the top ten most successful food and beverage CPG brands of 2012 in the Information Resources, Inc. (IRI) 2012 New Product Pacesetters report, an industry-recognized benchmark analysis of exceptional CPG sales success for newly launched products.

Nearly 1,900 new CPG brands hit retail shelves across the U.S. in 2011-2012, and only 11% of these launches met the stringent IRI standards of exceptional first-year sales success required to achieve 2012 New Product Pacesetter status.

Ranking number seven among ten food and beverage brands, Sparkling ICE shares this honor with a number of the world’s most recognized brand names, including Dannon, Starbucks, MiO, Nature Valley and Orville Redenbacher . 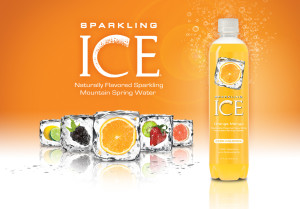 “Numbers don’t lie and when we look at the number of new products entering the marketplace today, it is an exceptional honor to be recognized once again by IRI as an outstanding beverage,” said Kevin Klock, CEO of TalkingRain.

“We pride ourselves on the dedication and focus our all-star team has put toward consumer research, product development and branding surrounding Sparkling ICE, and it is extremely rewarding to receive such positive feedback and recognition in the marketplace and from IRI.”

Sparkling ICE experienced initial consumer success in the Northwest after launching in 1992, but it wasn’t until the company underwent a reorganization of its management team in 2010 that led to changes in corporate and brand philosophies, including a new focus on Sparkling ICE.

This, coupled with an increasing consumer demand for a refreshing, flavorful alternative to carbonated soft drinks, led to a re-focused, national push.  As a result, Sparkling ICE has enjoyed significant growth in recent years.

“In fact, the manufacturers of these Pacesetter brands showed a quiet resolve and determination to stimulate growth despite a challenging economic environment in 2012.”