In one of the most unusual breakfast campaigns ever, Taco Bell’s TV campaign breaking March 24 begins with a 60-second highly stylized spot that shows two young people breaking away from an oppressive, dystopian prison-camp-like setting in a world called the “Routine Republic.” There, people eat only small, round breakfast sandwiches. As a young man waits in line to receive his routine breakfast, he pulls a sheet of paper out of his pocket that has a hexagon shape on it — a reference to the chain’s A.M. Crunchwrap — and the word “defect.”

He and a young woman, run away, but guards in Soviet-era military garb and a dictator in grim face paint — eerily reminiscent of Ronald McDonald — try to stop them. As they run, Ramones’ “Blitzkrieg Bop” plays. The duo becomes known as “breakfast defectors.”

Chris Brandt, Taco Bell’s chief marketing officer, said the idea behind the campaign was to highlight how “there was a sea of sameness” in fast-food breakfast. “It’s the most routinized time of day, and it’s hard to get people out of being on autopilot. We’re pushing against that routine….we don’t want to look like everyone else.” 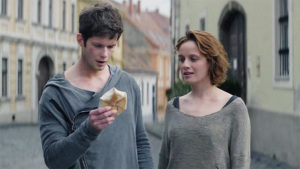 The campaign, created by Interpublic’s Deutsch LA, kicks off with the 60-second spot that will air during the “Walking Dead” and March Madness games, among other shows. A longer three-minute version of the 60-second spot will live online and will also run in theaters before the movie “Insurgent.” A 45-second propaganda-style film (snippets of which can be seen in the three-minute film), will also live online. On TV, the company will air 30-second spots with “breakfast defectors” who are actual Taco Bell customers giving their testimonies on why they like Taco Bell’s breakfast.

One 30-second spot will highlight the newest product launching later this week — a biscuit taco that comes in egg and bacon or fried chicken varieties. It replaces the Waffle Taco, which is being phased out because it’s “run its course,” said Taco Bell CEO Brian Niccol. The fried chicken, he said, is a product unique to Taco Bell in that the breading is made out of crumbled tortilla chips. It will also be available outside of the breakfast time frame.