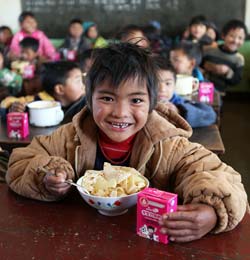 In Tetra Pak’s discussions with governments, development agencies and NGOs, more and more now raise economic development potential as an important consideration when assessing the merit of introducing a school feeding programme.

Among the examples of recent success she notes the following:

Through its Food for Development Office and network, Tetra Pak cooperates closely with governments, development agencies, NGOs, local dairy processors and farmers to support school milk programmes and dairy industry development. In 2011 6.7 billion packages of milk and other nutritious drinks in Tetra Pak packages were provided to 50.8 million children in schools in over 50 countries, up from 48.8 million children in 2010.

Tetra Pak and the FfDO supported several new school milk programmes in 2012. Among them are:

“Tetra Pak is committed to bring fresh, nutritious and safe foods to children,” said Holm. “Working with governments around the world, we are also helping to ensure that feeding programmes act as powerful catalysts to build local dairy industry capacity, creating new and lasting opportunities for prosperity across whole communities,” she said.